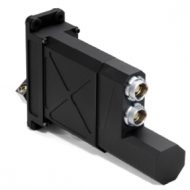 Available in both extreme and industrial environment grades, the intelligent servos are capable of generating speeds from 15rpm to 500rpm and torque of 1Nm to 12Nm. They can be controlled through analog signals, pulse-width, serial lines or CANBus, and can accept 12 to 48 Volts of power. Installation can be simplified by a single power/signal cable. With wide power and speed range, the intelligent servos are suitable for robotic arms, retractable landing gear, control surface actuators and drive motors for tracked or wheeled vehicles.

“These servos fill a need for power and reliability above the high-end R/C servos, where virtually no standard products have previously been available,” said Acuity Technologies president Robert Clark. “We started out looking for servos for a Navy UAS but had to build them, due to the lack of selection in speed, power, and form factor.”

For those demanding high reliability, configurable status/error reporting lets monitoring of bus integrity and servo status. The servos can be operated in velocity, position or torque mode, with up to 1,000 per second update rates for high performance human or autopilot control.

The Network Servo Controller offers power distribution and a single serial interface for a network setup of up to 32 servos in a daisy or star chain topology.