Beckhoff Automation (www.beckhoff.com) has added the EtherCAT media converter to its extensive range of infrastructure components.

Specifically designed for the bidirectional conversion of optical fiber physics to copper physics, the DIN rail-mountable devices have been enhanced to be applicable in highly deterministic EtherCAT networks that feature extremely short cycle times.

The EtherCAT media converters ensure fast control during the establishment of Hot Connect group connections or cable interruptions and are particularly useful in transmitting EtherCAT over increased electromagnetic interference or long distances. 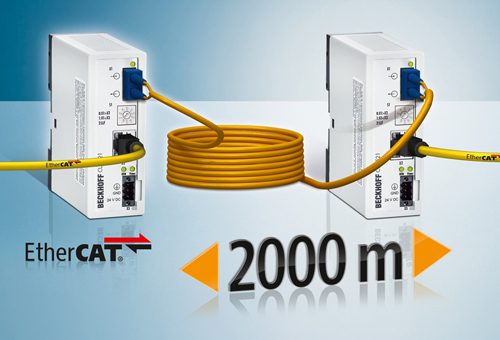 Perfect for situations with high electromagnetic interference, the CU1561 series is also useful in applications demanding simplified wireability. The CU1521 series, on the other hand, is ideal for applications expecting increased electromagnetic interference on the bus or that transmit EtherCAT over a maximum distance of 2,000 m between two stations.

The EP952x devices were developed by the company for applications demanding IP 67 protection. Aside from the copper branch, the dual channel EP9522-0020 also allows other optical fiber topologies to be configured through the second optical fiber port. Meanwhile, the single channel EtherCAT Box EP9521-0020 is utilized for direct transfers between the two media.