Continue to Site
You are here: Home / Integrated Motion Systems / Robotics / Drives and controls for robotics: See them at the 2019 Robotics Summit

In a couple weeks, the 2019 Robotics Summit (focused on the design, development, manufacture, and delivery of commercial robotics) will take place in Boston. It will be co-located with the DeviceTalks event at the Seaport World Trade Center. One display will be an array of precision processing and powering technologies for robotics.

Elmo Motion Control • Booth #118 — This is a top visit if you’re interested in drives and controls for on-robot (distributed) control. We recently touched on some multi-axis solutions for these setups in a visit at Automate:

In fact, you will get to see Brian Mason (who gives the booth tour in the above video) on Wednesday, June 5th at 2:00 at the Robotics Summit, when he will present on motion control in robots. You’ll also get to ask him questions about miniature network-based servo drives and novel ways to power and control robot joints for less cabling.

Infranor • Booth #139 — Look for servo drives and servomotors here, and give us a shoutout on LinkedIn if you end up having a conversation with this company about new robotics applications for semiconductor, packaging, or aerospace industries (and are at liberty to divulge a vague detail or two).

Performance Motion Devices • Booth #145 — Little-known fact about PMD … this company is well-versed in sharing motion fundamentals with the industry. So if your primary engineering focus is in fact not motion control and you attend the Summit, say hello to the team here to get answers to questions you’ve always wanted to ask but felt were elementary. Performance Motion Devices sells multi-axis motion products (and ICs, digital drives, and amplifiers, and machine boards) and provides technical support on these technologies.

PI • Booth #151 — Physik Instrumente makes regular appearances in our editorial for its precision subsystems. Piezomotors feature large in a lot of miniature designs — see what we did there? — although this company integrates a whole host of other actuator and motor types as well as various kinematics iterations. Check out this FAQ for more on the kinematic possibilities for some robotics: What’s the difference between serial kinematics and parallel kinematics in multi-axis motion design?

Kollmorgen • Booth #202 — Catch up on the features and case studies we’ve done (listed below) on how to size and apply servomotors, frameless motors, and stepper motors to robotics and other applications. Then go see the engineers from Kollmorgen at the Summit to see what new robotics applications they observe on the horizon for these technologies — especially for collaborative robots, industrial articulated robots, and medical robots … and particularly those employing frameless motors (a huge trend in the industry) as well as harmonic gearing for high torque density and smaller and faster robots.

Frameless motors and gearmotors for robot design at XPONENTIAL 2019 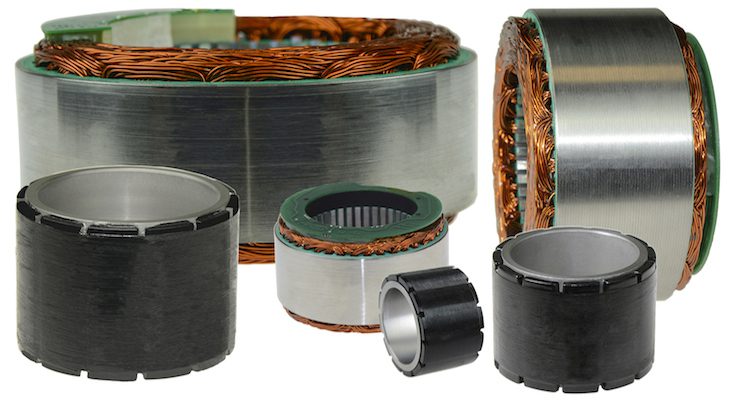 JF Shaw • Booth #212 — You’d be hard pressed to think of a component used in automaton and robotics that this company doesn’t supply, as they include sensors, connectivity equipment, motors, and drives; mechanical offerings relevant to the application of robots include spur gears, industrial belts, pulleys, and couplings … as well as whole assemblies and end-of-arm tooling including electrical and pneumatic grippers. We editors at motioncontroltips.com are just learning of the capabilities from this supplier ourselves, so stay tuned in coming months to get more on its engineers’ expertise in the design and integration of various industrial applications.