YuMi joins a growing number of robots designed to work alongside human workers in applications that don’t demand the same force as other heavy duty industrial applications and thus don’t require the added safety features of more powerful industrial robots. 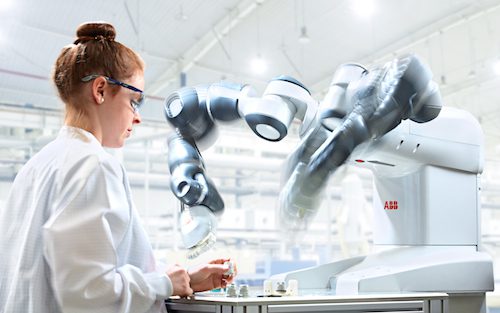 “The new era of robotic coworkers is here and an integral part of our Next Level strategy,” said ABB CEO Ulrich Spiesshofer. “YuMi makes collaboration between humans and robots a reality. It is the result of years of research and development, and will change the way humans and robots interact.”

In fact, BCG Research predicts that by 2025, adoption of advanced robots will boost productivity by up to 30 percent in many industries and lower total labor costs by 18 percent or more in countries such as South Korea, China, the U.S., Japan, and Germany.

The robot was designed for assembly tasks in the consumer electronics industry but is also suitable for other small parts assembly applications. In addition to its characteristic dual-arm, flexible hands design it also features a universal parts feeding system, camera-based part location and precise motion control.

But perhaps the most important aspects of the design are the safety features that enable it to work so closely with human workers. It has a lightweight, rigid magnesium skeleton covered with a floating plastic casing wrapped in soft padding to absorb impacts. YuMi is also compact, with human dimensions and human movements, designed to make human coworkers feel safe and comfortable.

If YuMi senses an unexpected impact, such as a collision with a coworker, it can pause its motion within milliseconds, and the motion can be restarted again as easily as pressing play on a remote control. YuMi also has no pinch points so that nothing sensitive can be harmed as the axes open and close. 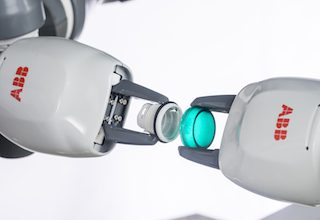 The field of these robotic coworkers continues to grow. In addition to ABB’s YuMi, there are a number of other robotic offerings from robotics companies such as Kuka and Boston-based ReThink Robotics. The aim of these newer robots is to replicate the human touch needed for high-precision industrial operations, such as small parts assembly.

Find out more at the YuMi information portal here.