“If you want to control the speed of a particular move,” noted Kevin Kaufenberg, product manager for HEIDENHAIN Corporation’s semiconductor, metrology, and medical markets, “the more counts an encoder can output per given period of time, the better the speed control will be. So having a very fine resolution from the encoder provides more counts that the controls can use to manage speed.” 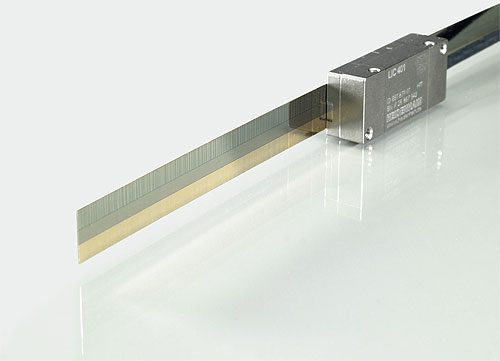 The company recently introduced the LIC 4000, a scale encoder with a resolution of 1 nm that is geared towards equipment for the medical markets, general motion, and semiconductor industries. Continued Kaufenberg, “the general rule in the motion industry is that if you want to position to 1 mm, then you should have ten times better the resolution, or 100 nm in that case. Someone could use the LIC 4000 encoder system to position to 10 nm.
Along with the high resolution, the encoder features absolute position measurement. The multi-substrate scale tape linear encoder reads current position immediately upon switch-on, eliminating the need for reference runs. Absolute encoders are well suited for use on direct drives. Together with the current position, the commutation offset is known immediately upon switch-on, so the motor can be provided with power and held in the control loop. Critical operating states, such as switching on a vertical axis with direct drive or retraction after an emergency stop, are controlled safely.

These encoders are insensitive to contamination, including electromagnetic interference. They use the Endat interface, which constantly checks itself for the proper data transmission. If encoders are mounted next to motors, electromagnetic noise can interfere with encoder signals. But with HEIDENHAIN cables and the Endat interface, the cyclic checks prevent miscounts in the encoder interface, which helps ensure safe motion.

The dimensions of the LIC 4000 match those of the company’s LIDA 400 incremental linear encoder for an easy retrofit. Thus, today’s motion control equipment can use absolute measurement technology by exchanging the encoders. Only the subsequent electronics must be adapted correspondingly.