The result is a compact design which has the dimensions of minimally 44x100x68 mm especially suitable for applications whose number of I/Os are relatively smaller. Similar to the regular EK1100 coupler, the newest EK18xx couplers could be extended by any of EtherCAT’s terminals. A single-wire technique implements the digital I/Os and wiring could be executed even without tools that utilize direct plug-in with wire end sleeves or single-wire conductors. 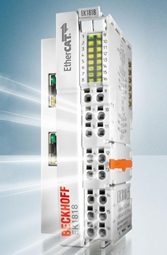 With its new EK18xx EtherCAT Coupler series, Beckhoff is indeed consistently leading the path towards miniaturization of designs along with optimization of costs.

The EK18xx coupler provides its users with a precisely dimensioned solution, as it is custom-made for applications with cramped space conditions and a small number of I/O points.

EtherCAT’s terminal system is a modular I/O system that comprises electronic terminal blocks. Technological features provided are well supported to the optimum, given that the EtherCAT protocol is retained to the individual terminal. The suitable EtherCAT terminals are available for all common analogue and digital signal types that may be encountered in automation. The lower-level bus systems are included via local master/slave terminals.