Continue to Site
You are here: Home / FAQs + basics / What is a servo drive?

Updated August 2019 || Servo systems consist of four main components — a motor, a drive, a controller, and a feedback device … with the latter usually an encoder. The controller determines what the motor must do and then triggers the drive to send the necessary electrical energy to the motor to make the required move happen.

More specifically, the controller is responsible for calculating the path or trajectory required and sending low-voltage command signals to the drive.

The drive then sends the necessary voltage and current to the motor to achieve the required motion.

Servo drives can control torque, velocity, or position …  although in servo systems, the most common parameter controlled is torque.

Note that servo drives are also sometimes called amplifiers because they take the control signal from the controller and amplify it to deliver a specific amount of voltage and current to the motor.

There are several types of servo drives. A common variation is the torque-mode amplifier. These convert the command signal from the controller into a specific amount of current to the motor. Because current is directly proportional to torque, the drive is controlling the amount of torque that the motor produces.

In contrast, with a linear drive (in which current is proportional to force) there’s direct control of the motor’s force output.

Remember that servo-motor torque is directly related to current:

To use an analogy …

• As the brains of the system, the job of the controller is to take information from the feedback device and send the appropriate voltage signals to the drive.

• The drive acts as the nervous system and sends the necessary amount of current to the motor. This process of reading and responding to feedback makes the system closed loop … which is the defining characteristic of a servo system.

One of the most important tools for sizing a servo motor is its torque-speed curve. But often, the torque-speed curve is specific to a certain motor-drive combination. This is because the continuous and peak torque capabilities of the motor are affected by the thermal properties of both the motor and of the drive. Inefficiencies in the motor cause it to produce heat, which can degrade bearing lubrication and insulation around the windings. Excessive heat — typically caused by running a motor above its peak torque — can demagnetize the motor’s magnets.

Although the drive has no moving parts, heat can damage its power transistors. 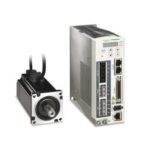 Servo drives were originally stand-alone components, separate from the motor and controller. But in the past 15 years or so, numerous motor manufacturers have developed integrated drive-controller offerings … as well as integrated motor-drive systems  … and even complete motor-feedback-drive-controller systems.

Slightly complicating matters is that these integrated designs (which include the motor, feedback, controller, and drive) are sometimes simply called drives for their axis-driving function. They tend to reduce wiring, make sizing and selection easier, and save considerable space and setup time.