Elmo Motion Control, a provider of advanced and cost-effective motion control solutions, announced a major record-setting advance with the release of its flagship Gold Twitter product, the smallest, high-power servo drive available on the market today.

At just 18 grams (less than 1 ounce) in weight, and less than 13 cm3, the Gold Twitter delivers up to 4000 W of qualitative power, ultra high current such as 50 A / 100 V with the most advanced servo capabilities and support for EtherCAT and CANopen field-bus communication standards for deployment in a variety of application configurations, compliant with international safety, EMC standards and STO certification.

“At a record-setting power density while delivering ultra high power of 4000W, we improved the efficiency by 200%, reduced the volume by 75% and increased the power density by more than 400%.

The GOLD Twitter is an excellent solution for applications that require very high servo performance but are very limited with space. In addition, the GOLD Twitter is rugged to meet the growing needs to mount the drives “on the motor”, “next to the motor”, or “on the moving mechanical load”, thus ensuring the high servo performance and saving huge costs in hardware and cabling.

Weâre not aware of anything in the industry that approaches this power and size density,â Haim Monhait, Elmo CEO concluded.

The Gold Twitter runs optimally on any servo motor and operates in current, velocity, and advanced position modes.

Based on the premise that âthe best way to dissipate heat is not to generate it in the first place,â the Gold Twitter incorporates Elmoâs proprietary FASST (Fast and Soft Switching Technology) resulting in >99% efficiency with negligible EMI.

Easily set up and tuned using the WindowsÂ® based Elmo Application Studio II (EASII) software, Gold Twitter servo drive can operate as a single-axis control solution or as part of a multi-axis control system in a distributed configuration real-time network. Among its expanded features, the Gold Twitter incorporates a powerful internal breaking shunt resistor and multi extended I/O interface.

Elmo will introduce the Gold Twitter in the upcoming SPS IPC Drives Congress taking place May 20-22, 2014 in Parma, Italy. Visitors can view the product at Elmoâs booth #LO61. 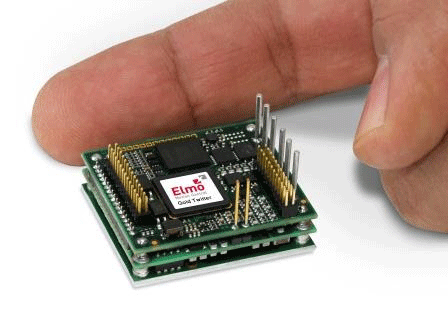