Continue to Site
You are here: Home / FAQs + basics / Heads or tails? A look at conveyor drive options

Conveyors are extremely versatile systems used for delivering bulk or discrete materials through processing operations or along assembly lines. One of the attributes that makes them so versatile is their ability to be configured in almost any layout imaginable, with curves, inclines or declines, and 90° or 180° turns to form complex travel paths. Another design feature that makes conveyors suited to a variety of layouts is that the drive (motor) can be placed at either end or, for some conveyors, at any location between the ends of the conveyor. 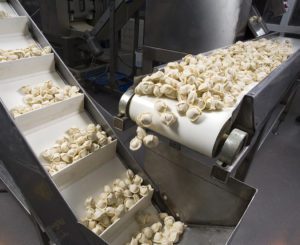 A head drive — located at the discharge — is the preferred configuration for most conveying applications, as it creates a “pull” force on the conveyor belt or media. A notable exception to this is a declined conveyor, where the weight of the transported load or the angle of the conveyor would create a “pushing” force that overrides the ability of the drive to control the conveyor’s movement. In these cases, a tail drive — placed on the infeed, or higher side, of the conveyor — would act as a brake to prevent the load from driving the conveyor.

A drive placed at the center, or anywhere along the conveyor’s length (but not at either end), is commonly referred to as a center drive, intermediate drive, or mid drive. Center drives are installed below the conveyor, directly under the transport media, and are often used when there are space constraints at either end that prevent the use of end drives. A center drive may also be used when knife edges are required on both ends of the conveyor. A conveyor with a center drive can also travel in both directions — sometimes referred to as reversing operation.

Note that some of the terms used here — particularly “infeed” and “discharge” — are most commonly associated with conveyor systems that use belt or chain media to move products (either bulk products or individual items) from one location to another.

The terms “infeed” and “discharge” are less applicable when talking about transfer conveyors or transfer systems — conveyors such as pallet conveyors that move discrete products through assembly, processing, or inspection stations. Typical nomenclature for these types of conveyors use the term “end drive” simply to designate a drive placed at either end of the conveyor.