In an effort to increase encoder compatibility with Siemens controls, HEIDENHAIN has developed the EIB 2391S interface box. Ideal for applications with SINAMICS drive components, the EIB 2391S enhances the serial interface offering for many of HEIDENHAIN’s absolute encoders. 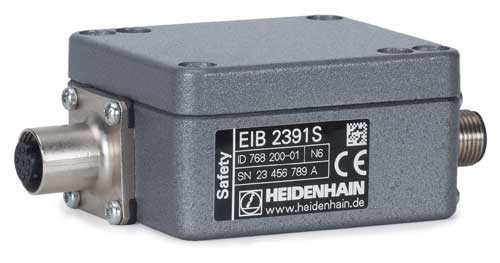 The EIB 2391S makes it possible to convert a HEIDENHAIN encoder’s output signal from EnDat 2.2 to DRIVE CLiQ.  With IP 65 and its compact size, the EIB 2391S is suitable for any industrial environment. HEIDENHAIN’s EIB 2391S 8-pin M12 connection allows the user to pull the cable needed to connect to the interface electronics box through even the smallest locations. Due to the benefits of EnDat 2.2, the EIB 2391S is capable of transmitting diagnostic information into a format recognized by the SINAMICS drive components. Increasing demand for safer machine tool operation, HEIDENHAIN’s EIB 2391S was developed for use in safety-oriented applications.