Transducers and sensors are essential components for data collection, systems monitoring, and control feedback. In motion-control applications, transducers take the form of rotary or linear encoders for position feedback, sensors such as tachometers for speed sensing, and even proximity switches to initiate or halt some machine action. In hydraulic motion control systems, for instance, pressure transducers are a key part of the control.

Transducers abound in industrial designs, consumer products, and everything in between. And with the rise of the IoT and IIoT (industrial internet of things), they’re poised to make their way into even more applications.

For instance, in the gaming world, Silicon-Valley-based Titanium Falcon sells a wearable smart ring. Called the Talon, it lets mobile gamers play games without touching their mobile devices, and see more of the screen as a result. “Traditionally, about 30% of gaming screen is blocked by the user’s hand or fingers,” said Titanium Falcon’s Co-founder and CEO Juan Guo. Using real-time 3D tracking, the Talon outperforms on-screen 2D controls to let gamers use quick and easy waves and gestures to control the application.

The Talon’s electronic innards include a microcontroller and a motion sensor that tracks rotational and lateral motion (in nine degrees of freedom). In contrast, traditional motion controls in gaming equipment such as the Xbox Kinect use motion-capture technology with limited accuracy and predefined set spaces. The Talon is also 90% smaller than traditional interfaces.

Through-shaft sensor offers position accuracy in harsh conditions
In steer-by-wire applications, Piher’s hollow shaft PST-360 contactless Hall-effect magnetic sensor provides accurate pedal or brake position. The sensor’s through-shaft technology lets it wrap anywhere around the shaft, enabling sensing directly at the source. It lets engineers integrate a fully featured rotary sensor directly on existing shafts without the packaging issues such as gears that typically accompany encoders or other through-shaft sensing devices. With no mechanical interfaces, this type of ‘clean’ configuration helps obtain an accurate and precise output signal over the complete life of the sensor, which is 50 million cycles that includes IP67 protection sealing. 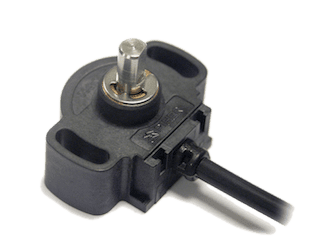 The sensor element is a rotating ring magnet. Internally, there are only two main non-contacting components – the magnet (the only moving component) and the electronics. Since the ring magnet never comes into contact with the sensing electronics, it has no sensitivity to dust or dirt and can therefore tolerate high vibration cycles.

The PST-360 was especially conceived for extreme environment applications in on-road and off-road vehicles such as tractors, forklifts, trucks, racing cars and many others.

Sensors help save time, reduce human error, improve productivity and above all ensure an increased level of safety. Procedures can be automated, or useful information, such as lifting height, fork position or the tilt of the lifting mast, can be displayed to the driver. In order to be able to implement these functions safely and easily, companies like SIKO GmbH offer wire-actuated encoders, angle sensors and tilt sensors. 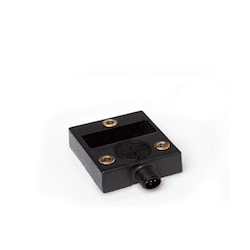 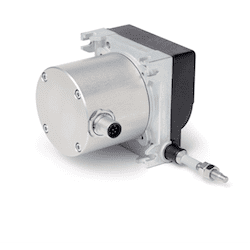 The SG32, SG42 and SG62 wire-actuated encoders offer improved safety by means of a special and complete redundant sensor technology, which is employed to measure the absolute position. Two completely separate

sensor systems measure the absolute position and give it out separately as analog signals. With a measuring range between 3 and 6 m, these wire-actuated encoders are best suited for measuring the absolute height of the lift mast on driverless transport systems. For forklifts, versions for up to 15 m are available. All sensors are available with the redundant interface, potentiometer, analog current or voltage, as well as CANopen.

Complementing these encoders are angle sensors. The first is a space-saving and robust angle sensor called the AH25S specifically for measuring the steering angle on driverless transport systems. An exact miniature angle sensor with a blind-hole hollow shaft was developed in close collaboration with designers of such systems, making them easy to assemble and, with its robust die-cast housing, offering a real alternative to existing sensors made of plastic. The precision sensing gives absolute measurements over 360° with a resolution of 12 bits and gives the angle position over the analog interface with no time delay.

Lastly, in order to reliably detect the tilt angle of the lift mast, as well as the whole vehicle, SIKO offers two robust inclinometers with its tilt angle sensors, IK360 and IK360L. The MEMS-based tilt angle sensors are fully enclosed with their high IP69K protection rating, and are available in two precision variants (0.1° as well as 0.5°). Both sensors are available as a single-axis variant (0 to 360°) or a two-axis variant (+/- 80°).