Motion controllers are pieces of electronics (and in an increasing number of integrated cases, electrical supplies) that run software to command movements on automated pieces of machinery. For more information on this, visit motioncontroltips.com/motion-controller. Motion controllers are designed to regulate the specific actuator type on the axes they’re commanding. That means these controllers include intelligence to command either electric actuators (based on electric motors) or hydraulic or pneumatic actuators. Watch the video for more:

Though motion controllers are specific to the task of moving equipment, they share some commonality with other controls for automation in process applications. These process setups are primarily dedicated to batch material processing, chemical production, climate control, and similar tasks in such disparate industries as food and beverage, oil and gas, paper and pump, chemical manufacture, and more. Much of the processor and computer hardware is similar, and their software is common in both history and form as well.

When integrated into a piece of machinery, motion controllers trigger axes to follow setpoints in either open loop (as with most stepper-motor designs) or closed loop (with the help of feedback). Then those signals go to the axis drive to ultimately prompt the actuator into action. 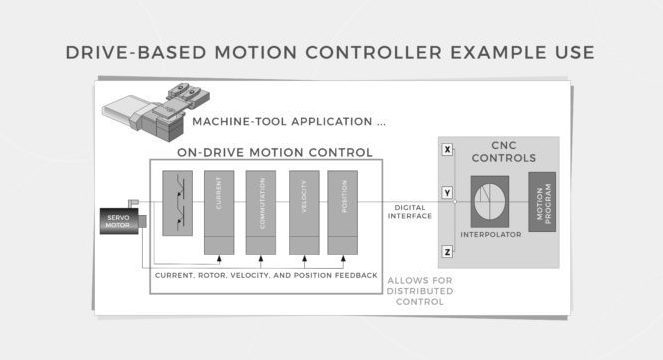 Otherwise, it’s increasingly common for motion controllers for pairing with electric motors take the form of what industry calls smart drives — the units we mentioned earlier that include both control electronics and circuitry to supply electrical power to the motor. These relatively new offerings underscore the appropriateness of the term amplifier used by some in industry to refer to drives — for the way they amplify low-power control signals into the full drive signals of electrical power supply.

More specifically, drive-integrated controls from some manufacturers incorporate drive functions, motion control, and flow logic on one open automation platform. Such IEC 61131-3 standards-based motion controls can execute complex motion tasks … and even act as a mater or slave in machines that need to coordinate motion axes in realtime.

Some motion controller iterations take it a step further to include application-specific functions. Consider those for for the machine-tool industry in CNC manufacturing. These let design engineers access core controller software and create their own IIoT functions and other machine features in high-level languages. In fact, integrated web technologies are only expanding the options for networked machine tools and other machine designs.

Other motion controller applications include those robotics, packaging, printing, semiconductor manufacturing, material handling, assembly, warehouse automation, and myriad other industries that make use of machinery.

Motion controllers in simple applications can run velocity control schemes … or position control. Here, the motion trajectory can follow a point-to-point track on a triangular, trapezoidal, or an S-curve velocity profile. Another common motion-controller mode of operation is pressure or force control. In contrast, with electronic camming, the motion controller uses software to link the behavior of a slave axis to that of a master axis.

When a motion controller runs impedance control — a form of control pioneered in the 1980s to get intentionally compliant behavior from pneumatically driven and motor-driven axes with software — it can help machine axes deftly manipulate objects or safely operate near plant personnel, for example. This is particularly helpful in pick and place and other soft-robot, rehabilitation, or corobot tasks. In fact, some motor-driven actuators with called variable impedance actuators require motion controllers that supply power inputs in tandem to adjust stiffness on the fly.

Networking for today’s motion controllers has become paramount — especially with precision and synchronization requirements that are more stringent than ever. Proprietary protocols and serial-networking hardware endure, and fieldbus networks such as PROFIBUS persist and grow. IEC fieldbuses also work in many of today’s motion controllers. The catch is that though some fieldbuses still offer reliability superior to that of nondeterministic Ethernet setups, Ethernet speeds now lead the industry. Five realtime protocols that provide deterministic networking so essential to many motion controller functions include the Common Industrial Protocol or CIP offering of EtherNet/IP, EtherCAT, CC-Link, PROFINET, and SERCOS III. Visit motioncontroltips.com/category/controllers for more examples on how a motion controller works and the forms it can take depending on the machine design.