Industrial communication protocols — including traditional fieldbuses and permutations based on Industrial Ethernet — are systems of rules for messaging between automation components. Variations abound, and there’s no dominant setup with which all devices work. What is clear is that communications offering more connectivity than current-loop (4-to-20-mA) analog communications continue proliferation into even once-simple motion applications.

Serial-networking hardware and proprietary protocols endure, and fieldbus networks (especially PROFIBUS) persist and grow. IEC 61158-defined fieldbuses work in setups for which they were developed and beyond, put to use by thousands of components sold and in use today. But while some fieldbuses can still be more reliable than nondeterministic Ethernet setups, Ethernet speeds have come to lead. 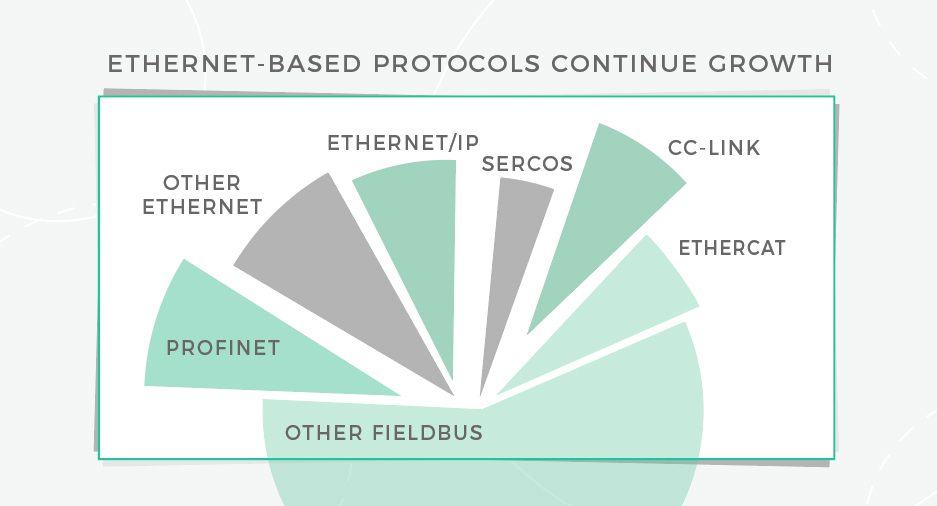 No wonder then that Industrial Ethernet-based networks continue to spread faster than other options — so that they’re now part of nearly 40% of all industrial communication networks. Other reasons include Ethernet’s ubiquitous and standardized design; widespread support; economies of scale from the worlds of IT, consumer electronics, and commercial off-the-shelf (CotS) Ethernet; ease of use and familiarity; allowance of multiple protocols on a network; and (as it’s often built-in) elimination of traditional network-interface cards.

As a reminder on USB, RS-232, RS-485, and Ethernet hardware, connections complete communication buses, but aren’t protocols and don’t constitute complete setups. To illustrate, Ethernet is merely the basis for the protocol of POWERLINK. Controls hardware often dictates the fieldbus communication a design will use. One benefit here is that offerings using traditional device and fieldbus networks can have multiple physical layers (including RS-232, RS-485, and CAN) but Ethernet networks run on one physical layer adherent to IEEE standard 802.3. What’s more, even though older variations such as 802.3c is slower than 802.3ab (at 1 Gbit/sec — the version called GbE) all use Cat. 5e cable. That makes all permutations of Industrial Ethernet implementation easier. In fact, many fieldbus components can connect to blocks that support Ethernet connectivity. Once on Ethernet, they connect via Ethernet RJ45 connectors and Cat. 5E cable.

Ethernet standardization also facilitates IIoT functions, as there’s commonality between systems for networking to enterprise-level systems, connected machines, I/O, and device-level functions and components. These unified IIoT architectures even encompass wireless variations and Internet connectivity to systems on the Cloud. That makes for communications that combine myriad data streams related to:

Though some still perceive the network to be proprietary, CC-Link is an open protocol that myriad equipment manufacturers use to impart networking functionality to PCs, PLCs, robots, servomotors, drives, digital and analog I/O modules, and various controllers. The protocol has speeds to 10 Mbps at 100 m and good speeds over longer runs.

Reconsider CC-Link IE Field, which supports the demands of advanced automation. It leverages GbE, so can handle IIoT data-stream quantities and speeds. The network links field-level devices to controllers; it also connects controllers to other controllers and proves absolute deterministic communications without the use of switches or detailed knowledge of Ethernet networking. CC-Link IE Field is IEC approved for safety communications; it also supports integrated motion control and energy management. In fact, it’s a rare Industrial Ethernet implementation actually designed from its inception for industrial environments with a token-based network (in which all networked devices keep control of the network for set times) for inherently deterministic control.

EtherCAT is short for Ethernet for Control Automation Technology. It uses Ethernet and twisted-pair or coaxial cables with BNC adapters over distances to 1,000 m and optical fiber cable beyond that. Transfer rates are those of Ethernet … and EtherCAT can control up to 65,535 nodes. Developed by Beckhoff, it’s fast and deterministic — processing data using dedicated software and hardware. It accommodates any topology and uses a full duplex master-slave configuration. It handles 1,000 I/O points in 30 μsec and communicates with 100 servo axes in 100 μsec. Axes get set values and control data and report actual position and status. A distributed clock technique that’s a simple version of IEEE 1588 synchronizes the axes with less than 1 μsec of jitter.

The EtherCAT protocol delivers fast throughput because hardware processes messages before forwarding to the next slave. Each slave reads data relevant only to it as the data frame passes, and inserts new data into that data stream on the fly. This procedure doesn’t depend on the runtime of the protocol stack, so processing delays are typically just a few nsec.

Ethernet/IP (short for Ethernet Industrial Protocol) began as Rockwell Automation’s adoption of Common Industrial Protocol (CIP) standards. EtherNet/IP is an industrial application-layer protocol for communication between industrial controls and components such as programmable automation controllers, PLCs, and I/O. As an implementation of CIP, the protocol uses standard TCP/IP (IEEE 802.3) and communications on existing network infrastructure. Ethernet hardware pairs with TCP and UDP ports. A main Ethernet/IP advantage (actually common to all the protocols we profile here) is an inerrant progress of physical Ethernet from 10 Mbits/sec to 10/100 Mbits/sec to GbE and more.

SERCOS: Realtime is its middle name

SERCOS (short for Serial Realtime Communications System) is an open protocol for high-speed serial communication of standard closed-loop realtime data over noise-immune fiber-optic rings (in the case of SERCOS I and II) or Industrial Ethernet cable in the case of SERCOS III. It’s a digital bus for networking motion controllers, drives, I/O, sensors and actuators for numerically controlled machines and systems. SERCOS interfaces close servo loops in the drive to reduce computational load on the motion controller (and synchronize more motion axes than otherwise possible). Closing servo loops this way also minimizes the effect of transport delays between motion controls and drives.

SERCOS III is an IEC-standard version. It combines Ethernet and previous SERCOS design benefits for deterministic bidirectional realtime motion and control. It also enables rich I/O communication and efficient transmission of all conventional protocols over the same Ethernet network — in parallel — with SERCOS realtime communication. SERCOS III has cycle times down to 31.25 μsec. It supports 511 slave devices in each network, with multiple networks possible in an installation.

PROFIBUS (by umbrella organization PROFIBUS & PROFINET Intl. or PI) is short for Process Field Bus. It’s the most common classic serial fieldbus, with use on nearly 20% of all networked industrial installations. The design uses slave-slave, master-slave, and master-master communication via twisted-pair or optical-fiber cable. Contrast that with PROFINET from the same organization, which uses Industrial Ethernet to get more bandwidth and speed. Like PROFIBUS, it uses GSD files to define connected-device hardware (though PROFIBUS GSD files are ASCII while PROFINET GSD files are XML.) PROFIBUS users benefit from familiarity with the design when migrating to PROFINET.

As with the other protocols, PROFINET’s basis in Ethernet leverages larger message sizes, better bandwidth, and unlimited address space (though with the latter, controllers impose processor and memory-based limits.) Another reason PROFINET speeds are fast is because of provider-consumer setups that (unlike more familiar master-slave setups) don’t designate a network-controlling device. The arrangements let nodes on a network communicate as needed. Because PROFINET leverages switched Ethernet networks that don’t exhibit collisions, it delivers deterministic communications for all speeds using both realtime and isochronous realtime (IRT) functions. Realtime functionality makes for update times down to 250 µsec, while PROFINET IRT has them to 31.25 µsec for synchronizing all networked components.