Kontron (www.kontron.com) has unveiled its third generation of 3U OpenVPX single-board computers (SBC), which feature the latest interface technology that is based on the third generation Intel Core i7 processor.

With the ability to support 10 Gigabit Ethernet as well as PCI Express 3.0, the 3U OpenVPX SBCs easily meet and exceed the high bandwidth requirements of network centric military, transportation and aerospace applications.

“By offering the highest speeds in PCI Express and Gigabit Ethernet on the VPX market, Kontron’s 3U boards can offer the same bandwidth in half the size of existing solutions. In a market where size and weight matter more each year, this product line is a real game changer”, said Vincent Chuffart, Military Product Line Manager for Kontron. 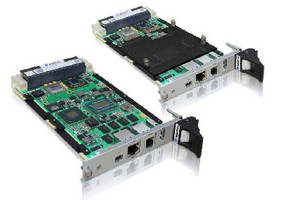 The Kontron VX3042 features a dual-core Intel Core i7 processor while the Kontron VX3044 is fitted with an Intel Core i7-3612QE quad-core processor, which makes it ideal for high performance embedded computing (HPEC) applications such as sonar, radar and other situational awareness applications. Their extraordinary data bandwidth enables both SBCs to outmatch installations that feature multiple switched GigE channels, while PCI Express 3.0 provides them with double the bandwidth offered by platforms with PCI Express 2.0.