Temecula, CA — Opto 22 has extended its series of free technical seminars designed to educate engineers and other automation professionals on the company’s intelligent I/O for Allen-Bradley Logix Platforms (coined “IO4AB”). The seminar series began in October of 2008 and, due to popular demand, will continue throughout the U.S. with stops in Tampa, Nashville, Salt Lake City, Seattle, San Francisco, and other major cities. 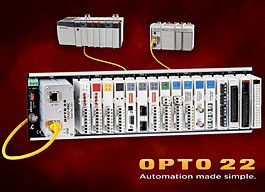 The Opto 22 seminars are designed to give Allen-Bradley and other automation end users, original equipment manufacturers, and systems integrators information on the options they have for maintaining or expanding Logix systems through the implementation of Opto 22’s SNAP I/O, an Ethernet-based input/output system for remote or distributed control systems. SNAP I/O integrates into ControlLogix® and CompactLogix® control system architectures natively, with no additional programming, and is unique in the industry by offering new intelligent, remote I/O capabilities for users of these control platforms. Seminar attendees will learn the scope and details of these capabilities and witness a live demonstration as SNAP I/O connects to and communicates with an Allen-Bradley CompactLogix programmable logic controller. The demonstration will showcase distributed analog process control functions (including PID loop control, scaling, engineering unit conversion, and thermocouple linearization) being performed independently of the PLC. Discrete control capabilities will also be demonstrated.

“We originally slated these seminars to run through the end of 2008,” says Benson Hougland, Opto 22 Vice President of Marketing. “The seminars have been so well attended, however, and feedback so positive, that we’ve decided to extend the seminars into 2009. We’ve also had very high levels of interest from the Allen-Bradley users we’ve reached out to. They’re eager to learn more about the new choices they have for designing and complementing their A-B systems, particularly in an economic climate where many of them are required to do more with less.”

Dates and locations for Opto 22’s free “IO4AB” seminar are available at http://www.opto22.com/ad/io4ab_seminar.aspx.