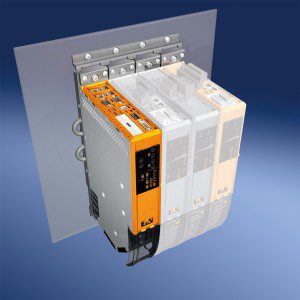 Roswell, GA – B&R Industrial Automation’s ACOPOSmulti system offers a high degree of efficiency for multi-axis machines implemented in a wide range of industries such as the plastics, packaging, print, and textile industries. Machine manufacturers can use ACOPOSmulti units to achieve maximum performance in minimum space, which in turn means a decisive cost advantage. The APC820 integrates the highest level of PC performance into ACOPOSmulti, allowing users to save even more space in the switching cabinet, by freeing up space intended for the PC.

In the APC820, high-performance Core™2 Duo processors ensure that the most demanding automation and visualization systems run optimally. The Core™2 Duo achieves a high level of performance and a low level of power loss because Windows XP and the real-time operating system run parallel to each other on separate processor core, allowing the available computing power from both cores to be used optimally.

Project can be easily developed in B&R Automation Studio. Completely new options and complex automation tasks that were previously distributed over a number of system platforms are now brought together in a single device. With the integrated Smart Display Link in APC820, up to four automation panels can be connected over a distance of up to 160 m. Complex processes on physically separated machines can easily be controlled on site – a distinct advantage for commissioning, operation and service.

A wide range of onboard interfaces allows the APC820 to be optimally integrated in an automation system. Real-time communication between APC820, I/Os and drives occurs on POWERLINK interface, which also comes standard. This helps achieve cycle times down to 200 µs and ultra-precise timing of less than 1 µs. The two Gigabit Ethernet interfaces provide machine level communication that is completely separated from the connection to the company network. There is an additional CAN interface available for the connection of additional devices.

The APC820 is designed for the toughest environments. For instance, not a single internal cable connection was used during construction, making it possible to achieve maximum vibration resistance and operational safety. CompactFlash cards completely free of moving parts are the storage medium, which are also optimal for use in Windows XP professional as well as Windows XP embedded.