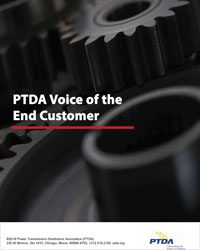 According to the newly released PTDA Voice of the End Customer report — which includes quantitative and qualitative responses from more than 1,200 customers of power transmission/motion control (PT/MC) products from a variety of industries — there are distinct differences in what end customers want from their distributors depending on the type of industry, the role of the person within their company and even their geographic location.

The Power Transmission Distributors Association (PTDA) has made the report and webinar recording available as a free download to its members only, providing them with knowledge to better target and sell to their end customers to ensure that buying through a PTDA distributor member will be an end customer’s channel of choice. In addition, the report’s authors and researchers will be presenting an exclusive distributor-only workshop at the PTDA 2018 Industry Summit to help PTDA members align their value proposition to changing customer needs.

PTDA first VP, Jim Halverson, manager power products, Van Meter Inc., (Cedar Rapids, Iowa) said, “We have already put this information to use at our company to win more business from end customers. My team has been all over the data. It’s very valuable intel.”

Illustrating the value of the research, more than 30% of PTDA member companies participated in a recent webinar which covered some of the key aspects of the findings. The report and webinar are only available to PTDA members. Learn more at ptda.org/Voice. Distributor companies interested in becoming PTDA members can review the qualifications and access an application at ptda.org/Join.