These cylindrical rolling bearings feature raceways oblique to the bearing axis, and can support high tilting moments as well as significant loads.

Meanwhile, SGL bearings are primarily set in “O” arrangements. The arrangement can, however, be easily adjusted to bearing preload from bearing clearance, depending on the requirements. The bearing cross-section, which is notably larger than the AXS bearings, offers higher axial and radial load carrying capacity. 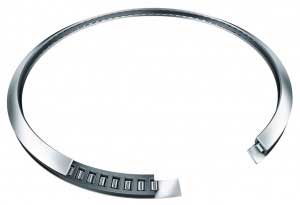 Available in 8 mm to 200 mm bearing diameters, the SGL bearings normally have a contact angle of 45 degrees, depending on the application and load condition. Compared to conventional angular contact ball bearings, the SGL series can support significantly higher tilting rigidity. The bearings can be directly interchanged with series 718, as they correspond to dimension series 18.

The SGL bearings are suitable for applications that demand optimum rating life and tilting rigidity.