Continue to Site
You are here: Home / Controls / Sizing and selecting servos: The need for a system approach

Never sized and selected a servo? Here we outline the basics of how interrelated parameters need a system approach. 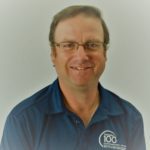 Sizing and selecting a servo for a motion design begins by understanding the components that make a servo motor or servo-drive system. Usually, servo designs are highly dynamic systems involving rapid load accelerations and decelerations.

They operate in all four quadrants, meaning they control torque and speed whether positive or negative.

Sizing a servo-driven design requires a system approach — in other words, a holistic view that accounts for global mechanical, electrical, and programming parameters. The system includes a definition of the mechanical load, motion profile (including positioning requirements), the servo motor characteristics, and the environment in which the motor and other components are placed.

Let’s begin with an understanding of the implications of the mechanical load and motion requirements. Basic Newtonian physics assert that force (or torque in rotary terms) is proportional to the mass (rotary inertia) multiplied by the acceleration rate, whether positive or negative. Within the context of a motion design, a machine build has its own mass and the mass of the load being transported.

So, it’s important to accurately define the mechanics — specifically, the masses in motion and the required motion profile.

Motion profiles are inclusive of not only the move from one point to another but also what functions might be occurring during that motion, such as thrust forces associated with machining of parts. Acceleration, traverse, and deceleration (as well as dwell or rest periods) are segments included in the overall motion profile of the system. Indexing moves can be simply a triangle move, variable trapezoidal or 1/3-1/3-1/3 (the most efficient tied to RMS torque).

Today’s sizing and selection tools help design engineers build out motion profiles based on the motion requirements of the application. Some manufacturers’ software tools also let design engineers describe moves in different ways … and then assist in calculations of acceleration rates, move times and distances, and traverse and dwell times. 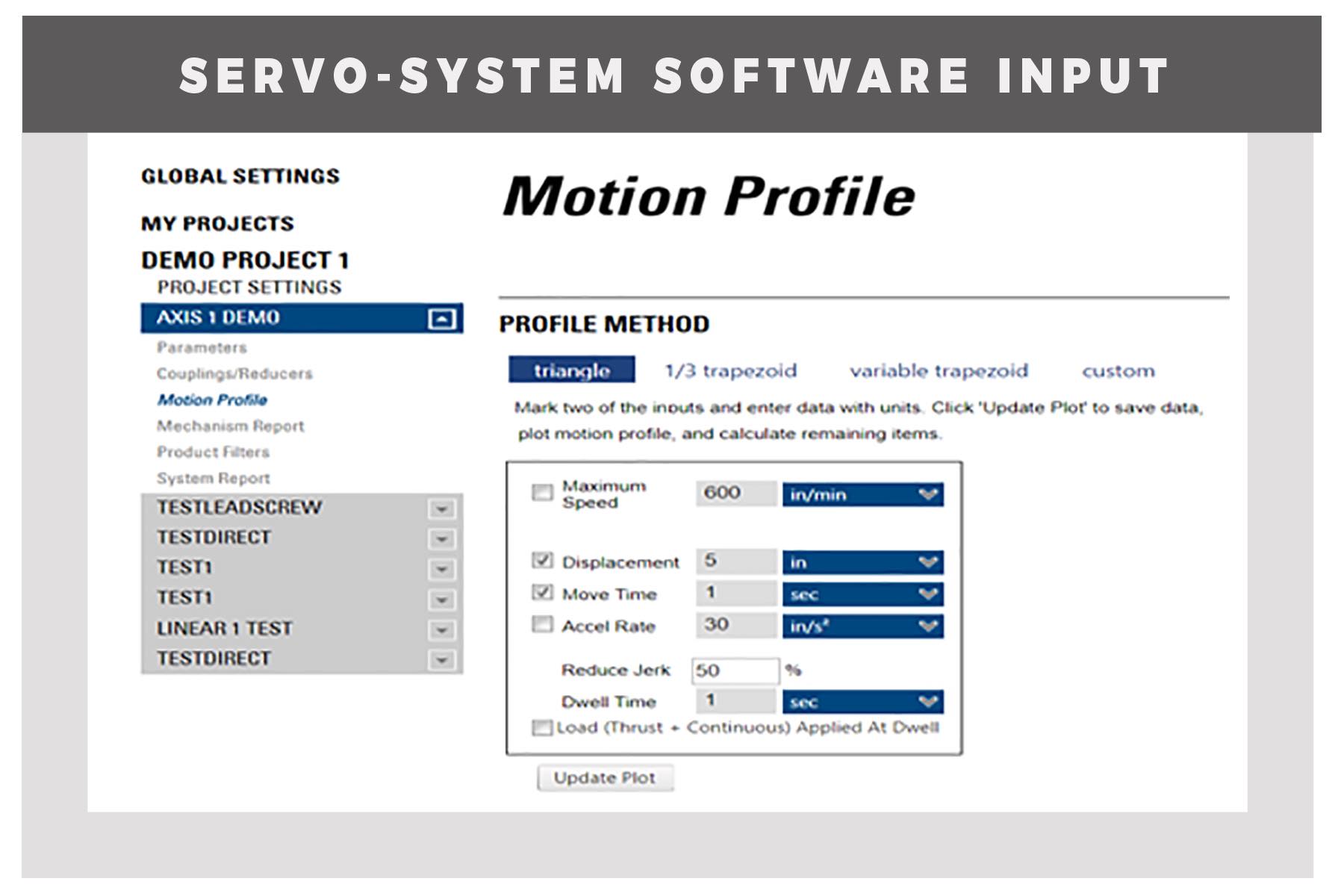 Consider a classic motion-profile example — a basic 1/3-1/3-1/3 profile with the introduction of 50% jerk to smooth out the acceleration rates. Assume we choose to move eight inches in one second using 50% jerk and a dwell of two seconds. Software then calculates the move assuming 1/3 of the time is spent accelerating, 1/3 is spent at traverse, and the last 1/3 on deceleration.

Maximum speed is calculated by our software tool at 720 in/min. Refer to the actual software screen captures illustrating this feature, and note the S-curve profile based on the 50% jerk rate. For this move, also note the thrust load (plotted as a red line) applied during the traverse portion of the move — the portion of this move profile during which machining takes place. The dwell period runs this out to the three-second mark. (This dwell portion is quite important, as all parameters related to this profile ultimately go into calculation of the RMS torque — the one measure we use in selecting the correct motor.)

Along with the motion profile, it’s important to understand the actual positioning requirements of the load regarding resolution, accuracy, and repeatability. These parameters dictate what feedback devices are suitable and (more significantly) how much mechanical assembly lost motion (in the form of backlash and compliance) is acceptable.

Unless the design can use a direct-drive motor solution, it will include a mechanical transmission of some type. Rotary-to-linear power transmission (to translate rotational motion into linear motion) is often through a pulley-driven belt or screw-based mechanism such as a ballscrew. Rotary transmissions include gearboxes or belt-driven assemblies to function as speed reducers using pulleys of various sizes. In some applications, parts being moved make a significant contribution to the total moving mass. One special case is when a machine axis must move a changing mass — as in the case of robotic systems in dispensing or machining, for example. Here, the total load change can be a factor in the tuning of the servo drive.

Remember: Sum the inertias of all components in motion and reflect that value back to the motor shaft. In addition, consider external forces as well as friction and inefficiencies during the design process.

It doesn’t end there. When specifying a servo design, only some available mechanisms will cost-effectively deliver the required motion dynamics, load-carrying capacity, and positioning accuracies. One often-overlooked consideration is the environment in which the servo system will operate. Most servo motors are rated for operating in 40° C ambient conditions — which is a very warm environment, but typical of many factory and industrial settings.

Drive electronics aren’t so forgiving of heat, and typically are rated for cooler ambient conditions — often for 25° C. So, determine where the motors and drives will be located once installed. Motors mount or integrate directly into the machine to drive the mechanisms holding the load. In contrast, the drives in a centralized scheme are located within a control cabinet — which typically is cooled. Why is this of concern?

Manufacturers define motor performance in part by the ambient condition in which it will operate. As mentioned, many definitions assume 40° C, but occasionally motors are rated at 25° C. If the ambient temperature where the machine operates exceeds the rated ambient, the motor won’t perform at its rated capability.

A lot of the upfront sizing effort in determining the motor-drive system power needed comes from the mechanics and installation environment. Now, as design engineers make their final component selections, they must consider the rest of the system components involved to deliver that power. Mechanism design and the application environment always influence suitable choices for a motor’s feedback element, cabling, and ultimately the control architecture chosen.

By definition, servo systems have feedback devices that measure velocity, position, and other system parameters during operation. Manufacturers may have limited choices, but careful consideration of specific application parameters — including shock loading and positioning accuracy and repeatability — is essential. Resolvers tend to excel in harsh environments especially with higher shock loads. Resolvers are rotary transformers consisting of coils of wire wrapped around a core for both the stator and rotor portions. This architecture allows for higher temperature operation and is much more forgiving in high shock loads as opposed to encoders which likely contain a glass disc element.

Sinusoidal encoders offer high resolution —up to 24 bits or higher— for best positioning accuracy. Some hybrid feedback devices offer robustness of a resolver with improved resolution capabilities. These smart feedback devices are based on a resolver with an electronic element that interprets the sin and cosine signals and converts them into a high-resolution digital signal which is passed to the servo drive to use in both velocity and position feedback.

The newest encoders today offer a variety of communication protocols (EndDAT, Biss, and DSL) and offer high resolution and noise immunity helping to reach the best feedback signal possible to the servo drives and controllers.

Another feedback choice that is dependent on the application requirements is the need for absolute position feedback versus incremental. In a rotary system, once the motor completes a 360° rotation, it starts over. An absolute encoder lets the system to know where it is within the 360° and how many times it made a complete turn in either direction … so it knows exactly where the axis is positioned. This may be very important to know in conjunction with positioning of tools and other axes. On the other hand, a simple incremental encoder identifies where the axis is in a single turn, so doesn’t know how many times that axis completed a complete cycle … or what the absolute position is.

We’ve talked a bit about the servo motor and servo drive, but cabling between the two is important as well. Cable flexibility as defined by its allowable bend radii is a key consideration here — especially where the cable travels with the axis.

Cable length may be limited by the type of feedback device considered. Cable parameters such as impedance and voltage drop (along with the feedback device’s signal strength) dictate suitable cable length. Some newer devices available on the market are transmitting serial information to the drive (such as DSL, EnDat, and BiSS protocols) at very high transmission rates which again are affected by length, specifically impedance and signal to noise ratios.

In fact, even connectors play a role in the feedback loop, as connectors must handle the kinds of signals being generated from these feedback devices. Another consideration related to the motor power that dictates allowable cable length is that of high switching frequencies from today’s PWM drives. Noise from this switching is always present in the motor power cable, and as the cable gets longer and reaches a half wavelength of the frequency riding on the cable, an antenna is created. Antennas like to transmit and receive information, and in this case, it’s noise … which isn’t desirable in high-performance systems.

A final consideration and one that may spur reiteration of the holistic design process (as well as changes to the other specified components of the design) is the system architecture. The engineer must ask: Should I focus on a centralized control system with drives, controllers, and supporting electronics packaged in a centralized cabinet, or would it be more beneficial and cost-effective to distribute the drives throughout the machine — a decentralized system approach?

A machine with a high axis count (where axes can be spread throughout the machine) is a suitable candidate for a decentralized approach. Decentralized drives can drastically reduce cable requirements, saving costs associated with long cable runs, along with the cable trays and carriers that would accompany these cables. In addition, moving the drives out on the machine reduces the size of the cabinet one would need to house control and support electronics – again reducing cost, and also, reducing the cooling requirements in the cabinet.

On the other hand, a compact lower axis count machine would not benefit as much over the traditional centralized approach.

There are many things one must consider when diving into an application when sizing servos, and we’ve covered many of those in this article. Another choice that does affect component choices as well is the control system. The type of control is usually dictated early on in the machine design discussion and depends on a wide variety of factors. Control choice also tends to establish the fieldbus communication choice. These topics are left for future discussion.

Bob White has been with Kollmorgen for more than 36 years, serving in a variety of positions — including applications engineering, product marketing, industry marketing, territory management, systems engineering, training, and now digital marketing.