STOBER Drives, Inc. of Maysville, Kentucky has introduced its EZF /PY hollow-bore pipe drive into its new product line.  Only a few manufacturers in the world manufacture a similar product. The hollow bore servo motor ranges from a zero to 3,000 rpm output speed, and 4.2 Nm to 350 Nm stall torque. It features an inside diameter ranging from 28 to 42 mm.

The EZF is particularly well suited for the packaging, printing, general automation, robotics, and machine tool industries. The gear motor eliminates the need for a right angle drive when space is critical, adding increased performance and lowering costs. The servomotor comes in frame sizes 5 (115 mm square) and 7 (145 mm square)—and an extremely short length: as small as 134 mm.

The EZF/PY provides industrial implementation of tooth winding using orthocyclic linear winding technology. This feature makes it possible to manufacture the stator windings with the highest possible copper fill factor. The winding technology increases the motor power output by approximately 80 percent; for this reason it is possible to shorten the length of the motor by almost half without reducing power output. 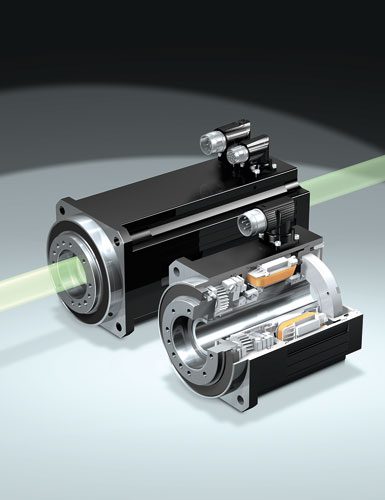 It is thermally protected by a Positive Temperature Coefficient (PTC) in each phase of production. PTC in the EZF/PY ensures that electrical resistance increases when outside temperature increases.  Once the PTC reaches a certain temperature (145 degrees C.), the monitoring system activates to protect the motor winding from heat damage. A KTY-84 temperature sensor is also available.

The PY also has water or forced air-cooling for a higher-rated power at high ambient temperatures, allowing for a 35 percent torque increase. A fan can be added in the field. Due to its weight-saving design, the pipe drive is particularly suitable for applications in which the motor itself is part of a moving axis. Rotatable connectors allow for easy connection and cable routing. The motor also features an optional magnetic brake for holding static loads.  The brake is engaged when the power is off.