Continue to Site
You are here: Home / Controls / The flexible Magellan Motion Processors

Performance Motion Devices (www.pmdcorp.com) has unveiled the Magellan Family of Motion Processors, which deliver high-performance chip-based motion control for automation, scientific, robotic and industrial applications. These flexible programmable devices are offered in one-, two-, three- and four-axis version and have the capability to control microstepping, brushless DC, DC brush and pulse and direction motors.

To be functional, the Magellan Motion Processors requires only an external amplifier. These complete motion controllers are driven by a host via an eight- or 16-bit parallel bus, an asynchronous serial port or CANbus 2.0B. Its users selectable profiling modes include trapezoidal, S-curve, electronic gearing and velocity contouring. Servo loop compensation employs integration limit, a full 32-bit position error, dual bi-quad filters and PID with acceleration and velocity feedforward. 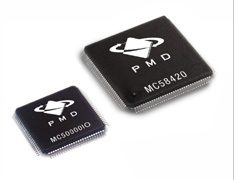 The Magellan Motion Processors feature more than 130 commands, delivering a powerful and flexible instruction that allow users to initialize and control motion application, synchronize the overall behavior of the machine and monitor ongoing performance. With the company’s Pro-Motion GUI, users can easily graph and analyze the performance of the system, while the C-Motion enables users to create their own application with C/C++.

Available in two versions — the MC55000 Series is dedicated to direction and pulse output, while the MC58000 Series can control microstepping, brushless DC, pulse and direction and DC brush motors.

Magellan Motion Processors are offered in a single-axis, single-IC version, or in a multi-axis, two-IC version. Operating at 3.3 V, the ICs of the devices are packaged in a 100-pin TQFP and a 144-pin TQFP.