Continue to Site
You are here: Home / Mechanical PT / Couplings / What are Flexible Couplings? Summary for Motion Engineers

Couplings join together two shafts as a way of transmitting power from one to the other. It is part of the drivetrain which may include other power transmission components such as lead screws or ball screws, gearboxes, belts and pulleys or chains.

There are two fundamental types of couplings; rigid and flexible. Rigid couplings are generally used in applications requiring precise alignment, whereas flexible couplings can be used where there is a slight amount of misalignment between shafts. So a flexible shaft coupling accommodates misalignment while still transmitting torque. Misalignments can be one of several fundamental types, including lateral, axial, angular, or skewed. The greater the misalignment the less efficient the motor is in generating speed and torque. And misalignment contributes to premature wear including broken shafts, failed bearings and excessive vibration. 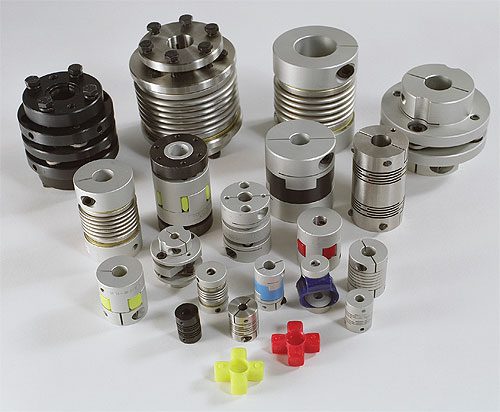 Flexible couplings are typically the most compliant of components in mechanical motion systems, making torsional stiffness a critical factor in terms of maintaining positional control over a load.

Types of motion differ in applications as well. For instance, in manufacturing lines, motion may be either continuous or start and stop. With the latter type there is a lot of vibration generated and couplings can help dampen the vibrations and diminish the settling time of the system and improve throughput. In contrast, continuous motion applications give greater weight to torsional strength over damping capabilities. Motion applications that require precise motion control such as in packaging and scanning and inspection call for zero-backlash couplings.