Santa Clara, Cal. – Animatics Corporation announces the latest release in their OEM Series of SmartMotors™, the new SM3416DT-PLS2. This technology now packs greater than 900W of peak power, over 1 HP, into the cube-shaped Integrated Servo. 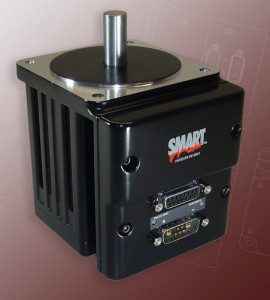 The OEM Series SmartMotor is a complete, programmable, motion control system that is known for being compact, user friendly, and cost-effective. Using a patented design, SmartMotors incorporate a servo motor, amplifier, encoder and motion controller into the same integral frame.

Similar to other members of the OEM Series of SmartMotors, SM3416DT-PLS2 is unique by virtue of its extreme low cost and high continuous and peak output torques. It delivers as much as 480 oz-in of peak torque while maintaining over 200 oz-in of continuous torque with a maximum speed capability of over 5,000rpm in a standard NEMA 34 frame. The entire line of OEM Series SmartMotors is priced competitively for high volume, OEM applications.