Cone Drive Operations, Inc. (www.conedrive.com) is proud to announce the release of its Servo Drive Model RG with an output flange to simplify machine connection. 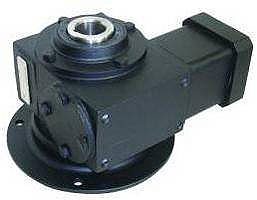 With the Model RG’s built-in modularity, several applications can now be used with its adaptability to NEMA frame and servo motors. The Model RG is the only model to offer true double enveloping worm gear technology, which is unrivalled in the market where positional accuracy and performance are demanded.

Model RG has center distances of 1.50in, 2.00in, 2.50in, 3.00in and 3.50in with NEMA frames or servo motor. It also provides an output torque of up to 8,540 lb-in, gear ratios from 5:1 to 60:1, backlash ranging from 6 arcminutes to 32 arcminutes and multiple output options, such as Solid, Hollow and Shrink Disc. In addition, both of its input and output shafts are doubled sealed.

Model RG features a flange mount that is placed on either side of reducer or mounting orientation flexibility from a single flange. It also offers double seal input and output to avoid leak issues regardless of a mounting position, zero backlash coupling to ensure proper fit of couplings and maximize overall stiffness, and double enveloping gearing with the highest capacity to improve reliability and minimize envelope. There is also a built-in lubrication (factory filled with synthetic oil & no breathers), as well as several output shaft options (metric or inch shafts as hollow or solid including shrink disc).