Continue to Site
You are here: Home / FAQs + basics / FAQ: How do drives for switched-reluctance motors work? 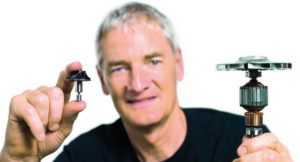 Switched-reluctance motors are stepmotors that accept power to their stators (instead of their rotors) to use output mechanical force through the use of reluctance. This is magnetomotive force to magnetic flux. 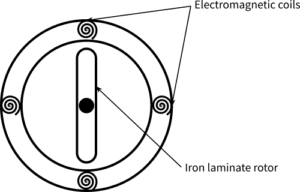 A typical switched-reluctance setup includes four components — the motor, a power converter, a logic circuit, and sensors.  Power converters for switched-reluctance motors require only one switch in series per phase windings because the torque is independent of current polarity. Each phase is independent, so the failure of one does not bring the whole motor down. There are a few types of converters:

Asymmetric bridge converters involve turning on two switches per phase. If the current gets too high, these switches are turned off.

This configuration stores energy in the motor’s phase windings to keep current flowing in the same direction until it depletes.

This is because this configuration allows the power devices to share switch operation. (n+1) does have restricted control when phases overlap, however.

Inserting these windings allows the circuit to restore magnetic energy. The voltage in the switches can be much higher than that of the voltage source. However, bifilar windings are complex.

A C-dump converter also recovers energy. It contains a capacitor the can resend stored magnetic energy back to the DC source. This setup uses a minimal amount of power switches which allows independent phase control.

Sensors are another component of switched-reluctance motor drives. These can come as a variety of encoders.

For a discussion of various encoder types, read:

FAQ: What is the difference between absolute and incremental encoders?

FAQ: How to use incremental encoders with stepper motors?

FAQ: Why are so many designers replacing resolvers with encoders?

For more information on switched-reluctance motors …