CHARLOTTESVILLE, VA — GE Intelligent Platforms announced the availability of its new Durus Plus controllers. The Durus is a complete controller with built-in I/O, control and operator interface.  The Durus Plus is a powerful low-end controller featuring RTD, analog out, four-function math, PID and the Modbus Master/Slave communications.  It builds on the solid foundation of the Durus, adding more functionality to the same footprint for applications where extra capability is needed. 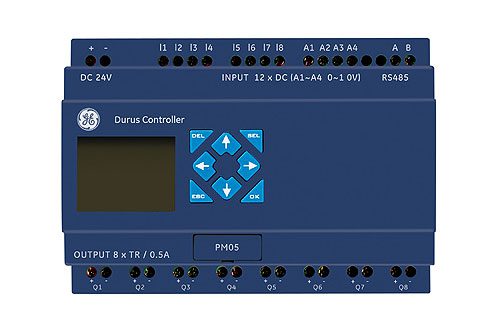 “Typical applications for the Durus Plus would be lighting control, conveyor control, water level control or motor monitoring were the unit can replace timers and counters for increased reliability,” said Bill Black, Controllers Product Manager for GE Intelligent Platforms. “The strong and sturdy family of Durus Controllers integrates I/O, operator interface and control in one small package.”

The Durus controller complements GE’s existing line of controllers and provides a rugged design filled with state-of-the-art features. It is built to take on the industrial environment with standard features like a built-in Operator Interface, a wide range of communications options, expansion slots, and a solid slide-and-snap mechanical interlock to expansion modules. Its very competitive price provides users even more choice in a controller product.

The new Durus Plus features additional functionality above and beyond the Durus: