Haydon Kerk Motion Solutions (www.HaydonKerk.com) has unveiled the Haydon RoHS compliant PCM7539X IDEA programmable stepper motor drive that can support up to 75VDC input voltage and a maximum output current of 3.85A RMS. Specifically developed to control larger-sized stepper linear actuators offered by the company, the new stepper motor drive features the same programmability as well as functionality as the lower-power IDEA drives.

Similar to all Haydon IDEA Drives, the compact PCM7539X is a fully programmable control unit that is easy to use. Featuring a patent-pending graphic user interface, the stepper motor drive can be programmed using on-screen buttons instead of other proprietary programming languages or complex command sets. The software enables the system designer to troubleshoot programs that use multiple line or line-by-line program execution through interactive debug feature. The software also has the ability to simulate inputs and outputs prior to connecting in actual I/O hardware. 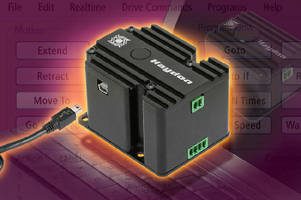 The PCM7539X IDEA programmable stepper motor drive’s technical specifications include 12VDC to 75VDC input voltage, programmable current control, eight digital I/O points, memory for up to 75 stored motion control programs and drive current per phase of 3.85A RMS plus a 30 percent “current boost” function that can be used during ramping.