Accelerations of 5 g or more can shorten the life of servo cables. But new cable designs are coming with greater tolerance for these higher accelerations.

In automated production machines, faster acceleration and deceleration of motion axes can lead to productivity gains. It’s no wonder that machine builders have started to adopt low-inertia servomotors that offer maximum accelerations up to 5 g, compared to less than 3 g for conventional servomotors. 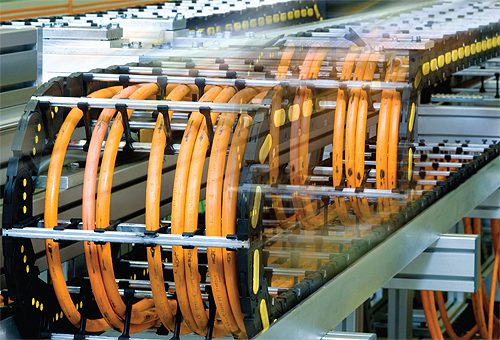 These motors can reach the application’s maximum operating speed faster, consuming less cycle time while ramping up to and down from that top speed. We’ve evaluated CNC applications in which an acceleration improvement to 5 g shaved around 2.5 sec off the time it takes a spindle to reach its operating speed of 12,000 rpm. The resulting gains in spindle efficiency came to more than 54%, which in turn helped improve overall machine efficiency.

Many applications with short cycle times can benefit from motor acceleration improvements, including:

So what does acceleration have to do with cable? It turns out 5 g represents a tipping point for servo cables. When subject to accelerations of 5 g or greater, traditional servo cables can experience forces high enough to shorten their working life dramatically. And keep in mind that rapid deceleration can be just as punishing on the cable as rapid accelerations.

Lapp engineers have already started to prepare for tomorrow’s high-acceleration motion control applications by developing servo cables for use in cable tracks or between fast-moving machine components. Every aspect of these cables—from the jacketing to the insulation to the conductors—has been optimized for a long life at 5 g.

Some of the design details are proprietary, but here’s an overview of what to expect from this new class of servo cables.

Greater stiffness to withstand stress. High-acceleration cables need to be a bit stiffer. FD 796 CP, for example, has a polypropylene insulation that is slightly stiffer than the TPE or PVC insulations typically used for servo cables. The extra stiffness better resists the additional stresses seen by cables subjected to high accelerations and decelerations.

Optimized to reduce cable mass. It’s also important that high-acceleration cables be as light as possible to limit forces. The FD 796 CP makes use of optimized materials and construction throughout. For example, it uses polypropylene insulation, which has a specific gravity of 0.96 for a mass density advantage relative to PVC whose specific gravity is 1.4. At the same time, polypropylene maintains a favorable dielectric constant of roughly 2.4 compared to 4 for PVC. The mass of the cable also derives from the manufacturing process. An optimized extrusion process allows us to keep wall thickness variation to a minimum for a further weight reduction. The optimized wall thickness, while still in line with UL requirements, also results in a low capacitance, which limits leakage currents on the copper braid.

Additionally, Lapp has introduced a similar cable called OLFLEX CHAIN 896 P, which does away with the control pairs and copper braid found in FD 796 CP. Also recently developed were high-acceleration encoder cables, such as the OLFLEX SERVO FD 798 CP.

As productivity-focused motion control systems turn up the dial on acceleration, the way cables are specified will have to evolve. In addition to the usual check list of selection criteria—such as bend radius, speed, flex life, and operating environment—you’ll increasingly have to evaluate servo cables for their ability to withstand the forces from acceleration.

The new cable supports accelerations in excess of 5 g and travel speeds up to 5 m/sec. Travel distances can range up to 100 m. Intended for flex applications, it has a minimum bend radius of 7.5 x OD.

Other than its ability to withstand high accelerations, FD 796 CP behaves much like any other high-performance servo cable. It resists oil and flame to UL standards. Temperature range for flex applications is –40 to 80°C.