A lead screw, also known as a power screw, is a threaded rod or bar that translates rotational motion into linear motion. When it comes to translating the rotary motion of a motor to linear motion, there are many different ways of accomplishing this task. Often times in the world of motion control, the battle between the different methods and technologies can get quite contentious. However, as a rule, it’s best to remember that specific applications are better for some technologies than others, and as always, cost and product life time are also critical factors in determining which technology to use in a given application.

Lead screws generate sliding rather than rolling friction between a nut and the screw. Consequently, higher friction means a lower overall efficiency. And efficiency, when talking about lead screws, is simply the ability to covert torque to thrust while minimizing mechanical losses.

Lead screw manufacturing processes can determine the performance and cost of the lead screw. For instance, there are three ways lead screws can be manufactured; by machining, rolling, or grinding. Ground lead screws are the most expensive and are generally considered to be the highest performing as well.

Another determinant of efficiency is the thread type. Acme threads are the simplest to produce, the most inexpensive, but also among the least efficient. Other types include buttress threads and square threads, which generally have the least amount of friction and higher efficiencies.

A lead screw has a number of advantages including a relatively high load carrying capacity. They are also compact and simple to design into a system with a minimal number of parts. The motion is also generally smooth and quiet and requires little maintenance. Lead screws also work well in wash-down environments because the materials used and the lubricant-free operation allows total immersion in water or other fluids. More after the jump.

On the other hand, lead screws do not have high efficiencies. Because of lower efficiency ratings they’re not used in applications requiring continuous power transmission. There’s also a high degree of friction on the threads meaning that the threads can wear quickly. Because a lead screw nut and screw mate with rubbing surfaces they have relatively higher friction and stiction compared to mechanical parts that mate with rolling surfaces and bearings. 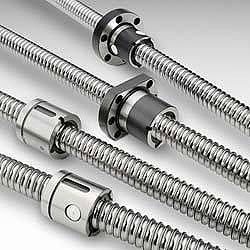 There are several considerations when choosing the right lead screw for a linear motion application. These include thrust, speed, accuracy and repeatability.

The two most important factors in determining the performance of a lead screw are the screw pitch and lead. The pitch is the linear distance between the threads while the lead is the linear distance the nut travels. Speed is another critical parameter. Lead screws have a critical velocity, which is the rotational velocity limit of the screw. Reaching this limit induces vibrations in the lead screw.

Accuracy and repeatability are also important factors to consider. The accuracy of a lead screw is a measure of how close to a desired end point the assembly can move a load to within a given tolerance. The accuracy of the lead screw will mostly determine the system’s accuracy. On the other hand, repeatability is a measure of how well a lead screw assembly can repeatedly move a load to the same position.