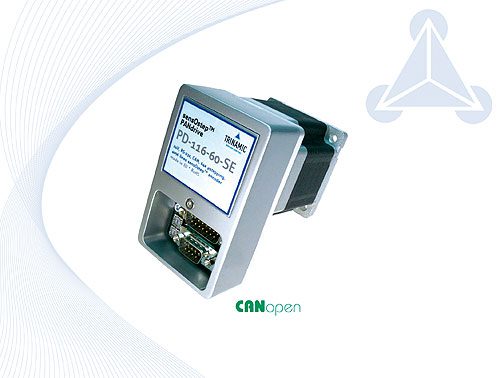 The new mechatronic units from TRINAMIC have an integrated absolute sensOstep™ encoder. CANopen firmware lets the PANdrives™ be used in large networks.

Optional CANopen firmware makes it easy to use the PD-140 and PD-116 in large net-worked applications, even with components from various vendors. The advantages of such distributed designs include greater flexibility, reduced wiring expenditure and main-tenance-friendly service.

TRINAMIC also offers its TRINAMIC Motion Control Language (TMCL) which lets engi-neers develop programs easily. Complete programs can be downloaded and run inde-pendently on the PANdrive, or specific commands can be sent to the drive. A selection of different interfaces such as RS-232, RS-485, CAN and USB are supported and a com-plete PC-based Integrated Development Environment (IDE) is available for free. The new PANdrive™ PD-140-42-SE from TRINAMIC has sensOstep™, which offers recognition and correction of step losses, and allows exact positioning and ‘step loss correction’.

Both models have general purpose inputs and outputs as well as additional inputs for limit switches or reference switches. The supply voltage is typically 24V.

An integrated encoder for position maintenance increases the system reliability at low cost. This is especially important in applications such as laboratory automation, biotech-nology, wafer-handling and chip testers.