The module supports circular interpolation of two axes, linear interpolation of up to four axes, continuous orbit control and fixed feed control. Users only have to set the speeds as well as the positioning addresses from within a sequence program. 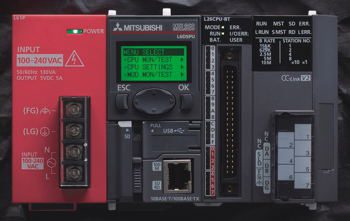 The module has been specifically designed to match a library of function blocks that are based on PLCopen motion control specifications. Offering single- and multi-axis functions, the library delivers a standard command set that effectively enhances the set-up, despite the complexity of motion tasks, leading to reduced maintenance, development and support costs.

Instead of using motion programming, the motion module employs parameter settings to simplify the system set-ups. A data table is used to execute the positioning control, while the positioning data is set with the help of functions such as offline simulation, automatic calculation of auxiliary arcs and speed simulation. Synchronous control can be implemented using parameter settings, while cams can be easily set without worrying of electronic cam controls.