The month of April features Earth Day, the one day each year that focuses attention on the varying and interconnected challenges and solutions to problem’s impacting the Earth’s ability to sustain life. These include pollution, energy demands, climate change, and a host of other issues.

For some time now, motor and drive manufacturers have been aware of the impact of motor energy draw on global energy demand issues. Specifically, how using some form of smart electronic motor control can provide both environmental benefits as well as economic ones such as lowering energy costs by using less energy.

Many companies have advertised these benefits over the years, including offering tools for calculating energy demands and cost saving tips. For instance, Schneider Electric offers a number of tools to help users determine energy usage, available on the company’s web site. On Siemens’ web site there are materials including white papers that explain some of the most effective ways to save energy costs. Also, Emerson Industrial Automation espouses using drives to lower energy costs, offering detailed explanations on their web site.

Another company, ABB, recently did an interesting calculated estimate of just how much energy their own installed base of drives saved in 2014.

Motor drives, the company says, are the unsung heroes of the energy world. Because they regulate motors so precisely, and because motors are the major consumers of energy produced for industry, the installed base of drives save energy and keep CO2 emissions out of the Earth’s atmosphere in dramatic proportions.

ABB tallied what the company’s drives saved the globe in 2014, for example. In energy consumption, the installed base saved 445 TWh (terawatt-hours), which is equivalent to what 110 million households use in energy, when each home consumes, on average, 4,000 kWh annually – an average for 2005, the year for which the latest statistics are available. 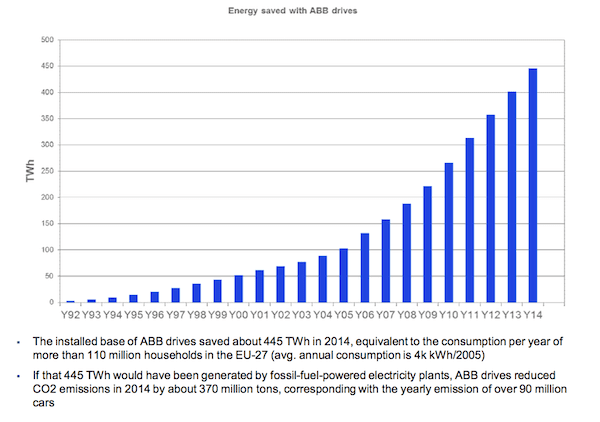 If that amount of energy would have been generated by fossil-fuel-powered electricity plants, these drives reduced CO2 emissions by 370 million tons.

Intelligent motor control methods, such as variable speed drives, can help solve the world’s energy challenges. Variable speed drives regulate the speed of a motor and can reduce energy consumption by as much as 30 to 50% in many applications and, in extreme cases, by as much as by 90%. Pumps are one of the most common motor applications and offer the biggest potential for saving energy because, at half the speed, only one-eighth of the power is needed.

The truth is that most motors around the globe still are awaiting control via a drive, and most are controlled with mechanical braking/speed devices, rather than electronic control. Consequently, there is a large potential to make a big impact by making some basic changes at the level of motor control.