The new TMCM-351 controls three compact two-phase stepper motor controls with up to 2.8 A per phase. It offers an optional encoder interface as well as numerous analog and digital I/O, all in an area of only 160 x 100 mm. The new TMCM-351 contains three compact stepper-motor controls for up to 2.8 A phase current on a small area of just 160 x100 mm.

The TMCM-34x family consists of miniaturized 3-axis motion controllers in the format of a credit-card, each with different output interfaces. 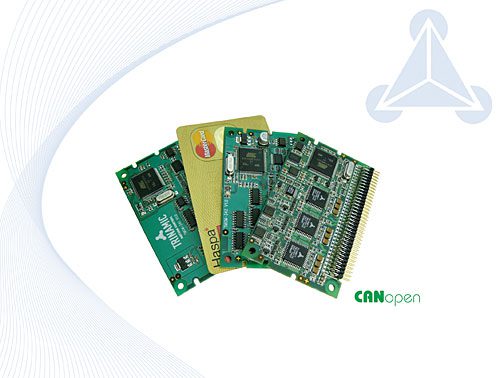 The TMCM-34x family consists of miniature 3-axis motion control modules in the format of a credit card with different output interfaces. CANopen firmware allows the advantages of cost-effective multiaxis-controls to be used in decentralised structures as well.

Beside the CANopen firmware all modules are available also with TMCL™ (Trinamic Motion control LANGUAGE). Thus they can be operated either alone or over any of several serial interfaces such as USB, RS232, RS485, or CANbus.

These modules are ideally suited to applications in which multiple motors must be controlled, including semiconductor handling, biotechnical devices, and laboratory automation.