Earlier this week at the LEAP Awards dinner gala in Costa Mesa, Calif., 11 winners were announced for the first annual awards competition recognizing excellence in engineering design. In the Industrial Automation category, Omnify Software’s Empower PLM Software won the top prize for its use in developing 6 River’s Robot Chuck

The judges for the award commented that the product was: “Highly innovative and will improve productivity … a great product that will be so helpful to individuals doing picking and packing of the product being shipped.”

Chuck integrates with Warehouse Management Systems so it can be used in all put-away, picking, counting, replenishment and sorting tasks. Chuck keeps warehouse employees on task by guiding them through the facility through each step of the packaging process. It can glide around the room and also has a touchscreen to help workers locate items. Chuck uses sensors to help detect worker productivity. It’s also been designed to help with employee training. 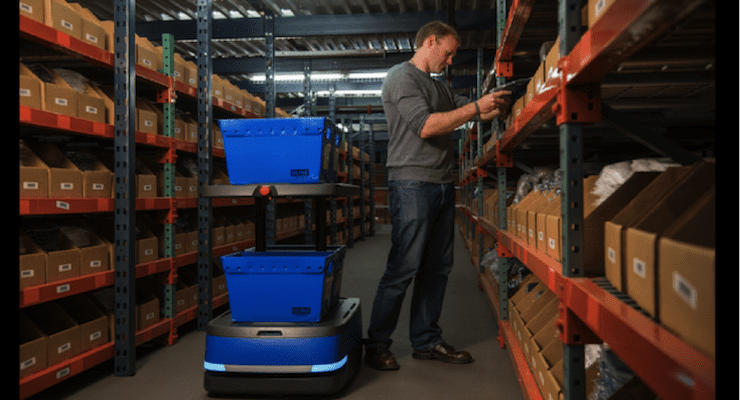 6 River isn’t worried about eliminating humans and instead believes there is an opportunity to help industries that have a “massive labor shortage” for warehouse suppliers. There aren’t enough people to fill the jobs.

The 6 River System robots offer an intuitive design and guide workers to the correct locations and step them through the picking process at a granular level. The robots can clearly increase worker productivity and picking accuracy. 6 River Systems offering can increase units per hour per employee by 200 to 300 percent. Pricing runs at about $250,000 for 8 robots in the first year and maintenance costs of about $50,000 a year thereafter. 6 River Systems currently has 20 customer sites with a total of more than 200 robots in use. It is the company’s end of year goal to have 600 Chuck robots in use across 40 sites.

The finalists for the Industrial Automation category were: