Fort Smith, AR — Baldor Electric Company (NYSE: BEZ) has launched a new plug-in motion/machine control module for its Ethernet-compatible Powerlink drives. The new controller module allows machine builders to eliminate the need for a separate external network controller, along with all of the cabling and panel space that would normally be required. As switching to real-time and deterministic Ethernet-compatible motion control is already proving extremely popular for machinery builders, the additional cost savings offered by this new approach make adoption of the technology almost irresistible. 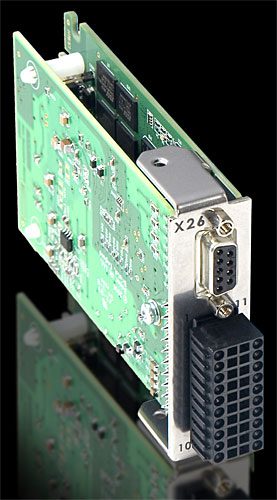 The new Mint Machine Module plugs into a hardware expansion slot in any of Baldor’s MotiFlex range of Powerlink-compatible three-phase AC motor drives. Two variations of the card are offered: a dual-axis version that will control the host Powerlink drive plus another external drive via a conventional analog interface, or a high-speed version that will also act as a Powerlink network controller to manage a complete multi-axis control system. Both options are compatible with Baldor’s powerful Mint motion language, with its rich development support.

The multi-axis control made possible by the new Mint Machine Module is a unique offering in the real-time Ethernet market. The design approach adds a number of further savings to the already-established cabling reduction and system building and benefits of Ethernet-compatible Powerlink networks. The hardware bill of materials can be reduced as the module can eliminate the need for a separate standalone system controller. It also eliminates the cabling, power supply, and panel space that would otherwise be required. 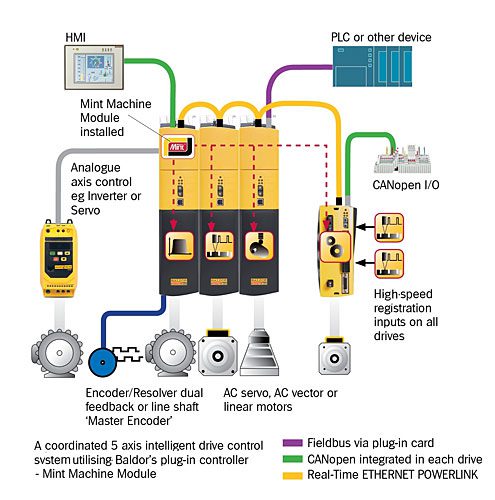 Plugging a controller into the drive itself still provides machine builders with complete flexibility of control system architecture, as the drive can be used as a standalone intelligent automation solution, or as a distributed element of a larger Powerlink network, or a complete multi-axis motion control system that operates autonomously.

The basic dual-axis version of the card will convert a MotiFlex drive into a very economic ‘intelligent drive’. This provides a complete standalone motion control solution with the possibility of local I/O and HMI: all drives include a complement of digital and analog I/O and this may be expanded easily via further card slots or the drive’s CANopen fieldbus interface. As many industrial automation projects also require some simple material handling functions as well, such as a material feed axis or a conveyor, the card offers a traditional analog interface that is ideal for controlling a low-cost frequency inverter drive.

If the motion control requirements are more sophisticated, the multi-axis version of the card will also act as a Powerlink network controller, powerful enough to control five axes of interpolated motion: the host drive itself, three other Powerlink-connected drives, plus another drive via the analog interface. As each drive includes a complement of I/O, plus a CANopen fieldbus expansion port, systems for highly complex automation requirements are easily configured.

Two further expansion card slots on MotiFlex drives also allow a system to be configured with any of a comprehensive range of fieldbus interfaces including Profibus DP, DeviceNet, Ethernet IP, Modbus TCP, and CC-Link – to act as a gateway to PLCs (etc), plus further I/O including encoder or resolver interfaces for dual loop feedback. The encoder option can, alternatively, be employed as a line shaft encoder for electronic geared motion applications.

Baldor’s Powerlink hardware comes with a versatile machine control development environment called Mint. Mint provides a high level control language that is similar in style to BASIC, but with advanced structured programming features, multitasking support, and a very large library of high-level ‘keywords’ that provide ready-to-use software for common motion control (and machine control) functions. Using Mint, and its development toolsuite, which is provided without charge, complex process automation requirements can often be programmed within hours. The Mint language can be used to create a standalone system. Alternatively, developers have the option of developing motion control programs on a host PC and transferring movement and I/O commands to the motion subsystem. Windows support is provided using the object-oriented ActiveX protocol. 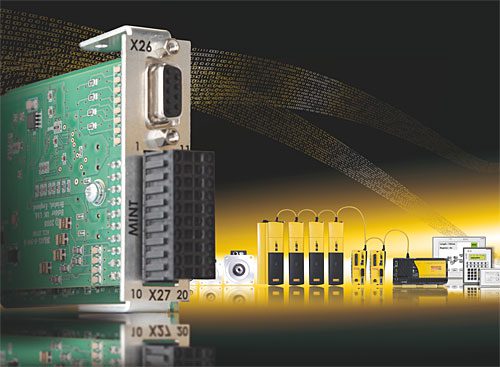 The Mint Machine Module plugs into any of Baldor’s MotiFlex range of Powerlink-compatible, three-phase AC motor drives. There are currently eight choices of MotiFlex drive with power outputs from 1.5 to 33.5A. MotiFlex drives can operate independently, or as part of a shared DC bus system. When operating in a shared DC bus system, power regenerated back into any drive during the deceleration phase of an axis may be utilized by the other axes, saving energy costs. As each drive has a local capacitor bank, an external braking resistor is often not required – because the total capacitance of the system may be sufficient to store the energy without reaching the over-voltage limit.

Unlike traditional shared DC bus systems, MotiFlex drive systems do not always require a separate power supply unit. Instead, the AC-DC converter stage in each drive is capable of supplying power not only to itself, but also to a drive or combination of drives of the same total rating. For many multi-axis applications, this will often mean that the highest-rated drive will be able to power the rest of the system. For many multi-axis systems, this approach almost invariably results in the need for fewer electrical components, and simpler system building, as only one set of contactors, fuses or MCBs, terminal blocks, and one EMC filter is needed for the whole system.

If the multi-axis version of the plug-in card is chosen, Baldor’s three-phase drives can be used to control a motion system with single-phase and three-phase Powerlink servo drives, as well as an external frequency inverter axis.