At last month’s Power Transmission Distributors Association’s (PTDA) Annual Summit at the Marriott Marquis San Diego Marina, the PTDA Foundation shared how it is helping to increase engagement and connections in the industry through its educational endeavors as well as recognition of lifelong industry leaders. 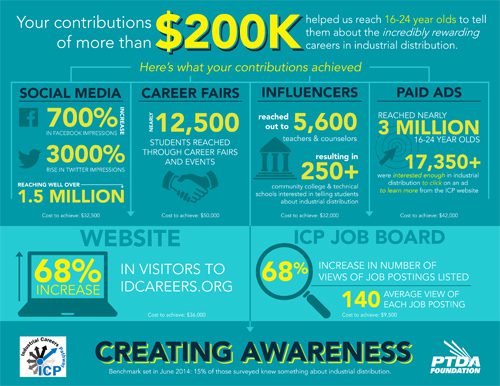 The PTDA Foundation, a 501(c)(3) organization with separate leadership from PTDA, is encouraging young people to consider an industrial distribution career through the Industrial Careers Pathway (ICP). As Michael Kelly, VP of Kaman Technologies pointed out, it’s difficult to find someone to even apply for open positions. So in 2015, the Foundation invested $200,000 in ads, social media, career fairs and more to reach 16-24 year olds and educate them about the possibilities of a career in industrial distribution.

ICP is working to reach, inform, prepare and bring tomorrow’s top talent in sales, management, production, accounting, customer service and all other business functions to positions in the field of industrial distribution. The organization provides resources to educators and parents such as data, matrixes and methodologies of careers in the field. For job seekers, the site offers a job board and directory of industrial distribution employers.

Also last week, more than $61,000 was raised to kick off the PTDA Foundation Vanguard Campaign while the spouse/companion 5K walk, along with donations from delegates, generated a $3,225 donation to the San Diego-based Children of Fallen Patriots Foundation.

Finally, of special note was the recognition by the Foundation of Linda Miller of B&D Industrial, as she was the latest recipient of the Wendy B. McDonald Award, which honors the memory of Wendy B. McDonald, one of the power transmission/motion control industry’s true pioneers. The award acknowledges a woman who has established herself as a critical contributor to her company’s success and has affected positive change within the power transmission/motion control industry.

Miller wasn’t seeking a career in power transmission/motion control distribution when she joined what was then Bearings & Drives in 1975. She had just moved to Macon, Ga., from Jackson, Miss., and was simply looking for a job. She had been referred to Bearings & Drives by a previous employer. From her first job as a clerk/typist, Miller began attending IBM training and was rewarded for her information technology skills by being named manager of information technologies in 1982. As Miller trained others on the new systems being installed, she also learned about the people she was training. It was a natural next step to name Miller as B&D’s first manager of human resources in 1996 (in addition to her IT responsibilities). Her contributions to the company in this dual role were recognized with her election to vice president later that same year.

In her acceptance speech during the PTDA 2016 Industry Summit in San Diego, Calif., Miller thanked many people in her life and said, “I do love this industry. Without the people in this room, the world would not exist as we know it today. Nothing would be processed. Nothing would be manufactured. And, nothing would move. In my book, that’s pretty heavy, so I want to say thanks to each and every one of you for contributing to the lifestyle we’ve come to enjoy.”

The PTDA Foundation, whose work is funded solely by donations, was founded in 1982 to enhance knowledge, education, professionalism and productivity within the power transmission/motion control (PT/MC) industry.