Continue to Site
You are here: Home / Controls / PLCs + PACs / Select the right machine controller for your application

Picking the right type of machine controller will minimize costs and complexity, while still providing the performance required for the application.

Many different controller options are available for machine automation, giving you the opportunity to select a controller closely matched to the application. All those choices can cause confusion. The Controller Comparison Table lists some of the leading characteristics of each type of controller to help guide your selection. 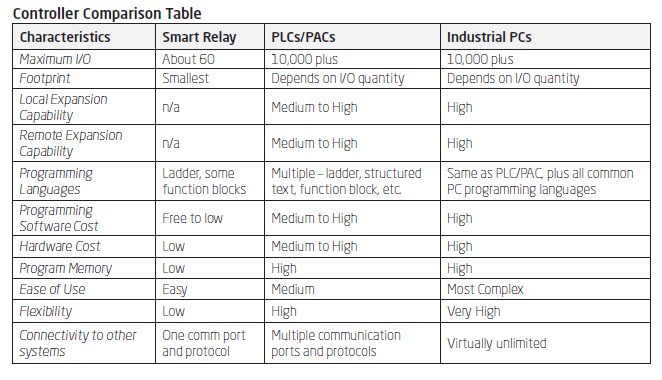 Let’s start with a class of controller often used in simple applications due to its low cost, small form factor and ease of implementation.

Educated relays
Relay-based controllers were very basic when first introduced and only suitable for use in place of a few relays and timers. But now, the capabilities of these smart relays are approaching those of micro PLCs, making them a good choice for control of simple machines. These expanded capabilities have led to increased demand with more than a million units purchased per year and an annual projected growth rate of 6%.

Most smart relays come with an integral front panel alphanumeric display (Figure 1), and some also feature an optional external text display panel. Typically, both displays show the same information, with the external display used when the base unit is mounted inside a control enclosure and thus not visible during normal operation.

Although most smart relays can be programmed through their display, it’s more common to use PC-based programming software, which is usually supplied free of charge with the relay. Once programmed, at least some of the smart relay’s settings, such as alarm settings and other values, can typically be modified with its display.

Some newer smart relays have built-in web server capability, allowing web pages to be programmed and stored in the unit for remote access with any web browser. This feature connects the smart relay to the world through the internet, useful for remote access. Some suppliers are also writing smartphone apps to enable communications with their smart relays with Apple and Android phones, which greatly increases speed and ease of remote access.

Ladder logic or function block are the programming languages of choice, which makes it easy to write efficient programs for simple operations. Internal program storage is limited, so operations can’t be overly complex. Smart relay I/O used to be strictly discrete, but analog I/O is now becoming available on some newer units.

With respect to maximum allowable I/O, IDEC’s FL1F SmartRelay can handle up to 60 I/O with its base unit and expansion model. These 60 I/O consist of a maximum of 24 discrete inputs, 20 discrete outputs, 8 analog inputs and 8 analog outputs.

When this amount of I/O isn’t sufficient, or when other features are required such as a graphic display or more sophisticated control, the next step up is a PLC or a PAC.

Is it a PLC or a PAC?
Programmable logic controllers (PLCs) and programmable automation controllers (PACs) are the main engines driving machine control worldwide, and with good reason. Starting with the introduction of the PLC as a relay replacement in the 1960s, these controllers have grown to dominate the machine control market. Annual purchases exceed 8 million units with a growth rate of about 7%.

Although there is no clear line defining the difference between a PLC and PAC, in general PACs add more capabilities than PLCs, particularly for control of very complex systems. PACs can handle advanced motion control, incorporate vision systems and perform advanced control of analog loops—a set of tasks that might unduly burden a PLC.

These controllers run the range from micro PLCs with about 32 built-in I/O points, to full-featured PACs capable of handling tens of thousands of I/O. For example, the Micro PLC pictured in Figure 2 can handle up to 520 I/O total, and 126 of these I/O points can be analog. Although this controller is labeled as a Micro PLC, it approaches PAC power in many respects including execution speed and program memory.

Multiple operator interface options can be used for PLCs and PACs. The first is the supplier’s operator interface graphics terminal, often connected to the controller with a proprietary interface. The second is an embedded HMI, which consists of third-party HMI software running on some type of embedded platform. The third is a PC-based HMI.

PLCs and PACs are programmed using PC-based software, and any changes to the program typically require a PC. The programming PC typically connects to the PLC or PAC through an Ethernet port. Although the program usually can’t be changed without a PC, many parameters can be adjusted with the operator interface device such as setpoints and alarm values. When the operator interface device is a PC-based HMI, the PC can also be used for programming.

PLCs and PACs are capable of controlling almost any machine, and many now have built-in PID and motion control. Copious on-board memory allows real-time and high-speed control of many I/O points and control loops, even for sophisticated applications like multi-axis motion control.

I/O can range up to tens of thousands of points, and can include many types of local and remote I/O modules. Very high-speed applications can be addressed with special I/O modules with quick scan times, and high-resolution modules are available when precision is required. Remote I/O modules are often available in machine mount versions, with no cabinet mounting required.

Networking options are numerous, with almost all PLCs and PACs equipped with multiple Ethernet ports and support for various Ethernet protocols. Communications with these ports can typically be programmed in scripting languages, which are much more powerful and easier to use than ladder logic for these types of tasks.

Even with all these options, some applications demand even more performance, making an industrial PC the best fit.

PC performance
Industrial PCs (IPCs) are at the top of heap in terms of machine control, combining the power and connectivity of a PC with the ruggedness of a PLC. As one would expect, costs are correspondingly high, making these controllers economical only for the most demanding applications.

Many modern industrial PCs now come in rack-mount versions, giving them an appearance and form factor similar to a PLC or PAC. IPC I/O also looks similar, with local rack mount and remote options, easily expandable to tens of thousands of I/O points. IPCs are the most open of all controllers, so adding almost any type of I/O is possible, often through the addition of a plug-in card to handle a particular protocol.

And because IPCs are so open, connectivity is easy, with the ability to connect to virtually any type of HMI, controller, vision system or upper-level computing platform such as a database, ERP system or a manufacturing execution system.

In terms of programming languages, expect an IPC to accommodate all the IEC 61131 languages, as well as PC-based languages like C++ and Virtual Basic. Because so many different languages can be used, the cost of IPC programming software is typically quite high.

Program and data storage memory can be expanded as required, allowing both execution of large real-time control programs and storage of manufacturing data. There are also many options for storing data including internal disk drives, CDs and jump drives.

One way to get more bang for the buck with an IPC is to combine control with HMI functionality. When this is done, all that’s needed to create a powerful graphical interface is an industrial monitor. This concept is also trickling down to more applications in the form of combo PLC+HMI units, as discussed in the Combo Controllers sidebar.

Your three main options for machine control are smart relays, PLCs/PACs and IPCs. Each option has its place, and making the right choice will help keep costs and complexity down while providing the required level of performance for your specific application.

Although combo units traditionally weren’t as powerful as PLCs or PACs, their capabilities have expanded over the past few years to include analog I/O and control, Ethernet connectivity and web server functionality.

Motion controllers are a good fit for machines with lots of motion functions, but with few other real-time control requirements. Although these units excel primarily at motion control, many also include I/O and logic capability to control a limited number of discrete and analog inputs and outputs.

Although many PLCs, most PACs and all IPCs can perform motion control, using a dedicated motion controller can simplify programming, startup and maintenance.

Another type of specialty controller is dedicated to hydraulic systems, making them the right choice to control hydraulic machines. As engineers like to say, given enough time and budget virtually any controller can be programmed to accomplish any task, including control of a complex hydraulic system. But, using a controller dedicated to this specific function provides the best tool for the job, reducing design and programming time and costs, and simplifying startup.

Like motion controllers, most hydraulic controllers contain logic and additional I/O for control of other points in addition to hydraulic systems.