Continue to Site
You are here: Home / Controls / What are programmable logic controllers (PLCs)? A technical summary

Updated May 2015 || Programmable logic controllers — or PLCs — are highly specialized, programmable microprocessor-based controllers used to control a specific application on a machine or a process. They are used in automation and manufacturing to control assembly lines and machinery on factory floors as well as many other types of mechanical, electrical, and electronic equipment in a plant. They can be used in applications ranging from vending machine controls and packaging machinery to roller coasters and complex camera positioning systems.

The earliest PLCs came along to replace large cabinets of electromechanical relays which were used to control machine processes. Cabinet-based control systems were big and bulky and required an enormous amount of wiring. And when a change in the control system was desired, the only way to do so was to go into the cabinet and rewire connections, which was costly and took up a lot of time.

The introduction of PLCs meant that the same control functions could be accomplished in a fraction of the space of a traditional control cabinet with far less wiring and complexity. Also, if a change in control was desired, the change could be handled via simple ladder-logic programming, eliminating the need to rewire large portions of a control cabinet. 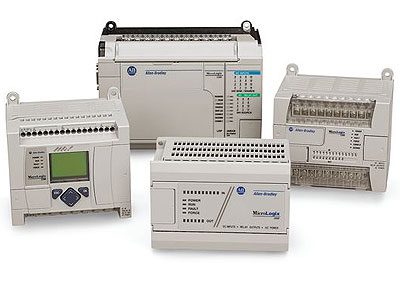 The basic parts of any PLC system include the processor, I/O modules to handle inputs to the controller and outputs to the controlled devices, and some type of user interface which could be as simple as a keypad or a touchscreen interface or a programming link via a PC. The PLC’s processor is programmed via the user interface. The I/O modules are used to bring input signals into the PLC’s CPU and output control signals to controlled devices such as motors, valves, sensors and actuators, among others.

Individual PLC manufacturers may have different programming languages, but most are still based on the fundamental ladder logic programming structure. Although now, they can be programmed in higher-level languages such as C and BASIC. Communication options may include simple RS-232 serial communications to more advanced Ethernet protocols.

One of the most important considerations for any PLC is the scan time. Basically, this is the time in which the PLC runs through the program taking in data and updating outputs. This is typically a few milliseconds but can be much longer depending on the program length and the speed of the processor. Higher scan times can accommodate processes with more real-time demands than traditional slower applications where scan speed is not as critical.

Other points to consider include the I/O count and the ability to expand I/O if needed. This can range from a handful of I/O for simple applications to hundreds in more complex machinery. The type of I/O, whether analog or digital, is also important. It’s common for manufacturers to supply modules designed for unique input types, such as counting encoder inputs.

Another point to consider is the level of customization needed. For instance, PLCs can be set up with individual web pages where operators can go to view system parameters and machine conditions. They can also be programmed to send alerts and condition status updates to mobile devices such as cell phones to keep operators and engineers abreast of machinery and processes.