The EM1024 enables higher-accuracy and higher-resolution triggering of devices in demanding motion control applications, such as wafer and flat panel inspection and metrology, digital printing, and biomedical systems. Examples of common applications include: 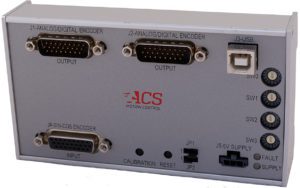 “We are pleased to add this compact yet powerful product to our offerings. The EM1024 offers higher precision and enhanced capabilities over its predecessor,” says Jason Goerges, ACS Motion Control USA General Manager and Global Vice President of Marketing.

Key features of the EM1024 include:

The EM1024 is available for immediate shipment. For more information, visit acsmotioncontrol.com.