Continue to Site
You are here: Home / Controls / PC-Based Controllers / Catching up with Beckhoff at ATXEast 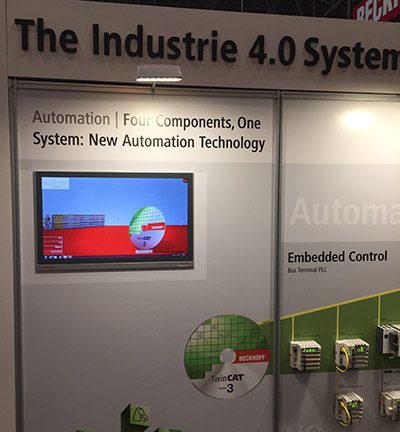 I had a great chat with Beckhoff’s Daymon Thompson at last week’s ATX East trade show at New York’s Javits Center. The PC-based machine controls company features a range of processors, from an ARM processor all the way up to an industrial server with 36 cores and two terabytes of memory—possibly the biggest PLC on the planet.

“At this show we’re showing EtherCAT P, so it’s basically Power over Ethernet, except on the industrial scale,” Thompson said. “It’s an open standard from the EtherCAT technology group. We’re the first ones to launch a product against it, but many companies are building products for that power over EtherCAT standard.”

Another big theme with the show was IoT—in fact, there was a whole session track dedicated to it at the conference. Thompson said he felt that there was a lot of good content.

“We talked about our solutions for IoT and taking the communicate-to-cloud-based services like Microsoft Azure, Amazon Web Services, whatever they might choose for the implementation strategy. We’re able to do that from the PLC, using PLC function blocks with a programmer, and then connect to the cloud without having to be an IT programmer, just a PLC guy,” he said.

“We also talked a lot about our analytics workbench that we’re developing. The idea there is to be able to stream data from a machine, sort things with every scan of a PLC, and then be able to go back in the same environment as the PLC programming and really analyze the data to figure out how to optimize the machine, make it run faster, find any weird anomalies in it.”

During set up, Thompson explained, one mode in this work bench allows you to optimize the system to make it faster and optimize the cell. You drag in tools you need, but beyond that, you may want to continue to monitor things. Maybe the timing on a loading sequence is continually growing. You can put the timing through a timing analysis block, and then put that through a rate of change block and set a threshold. Click the button that says “generate code” and it will actually generate a PLC code so that it continually monitors things.

“We’ve also developed, with our IoT suite of products, a function block library for a PLC programmer,” he said. “He can decide he would like to send this data or this message to an iPhone or an Android. It’s a free downloadable app, so if you tie all the products together, we can run real-time analytics on the machine—kind of edge computing. Then, if something changes like the loading sequence time, if it has increased over time in a certain rate of change, then we send a notification to say a production manager or a maintenance guy. Then a little alert shows up on his smartphone, that says that machine is having increased loading time.”

“When we want to build the analytics tools, it literally looks like a toolbox on one side that says ‘I want to do trigger analysis,’” Thompson said. “I drag in a trigger analysis and then drag in one of the PLC variables for, say, a Boolean. Now I want to know how many times do I go from high to low, low to high, and then when that happened? So, I drag in some other tools and will be able to correlate all kinds of different events in the machine.”

Thompson said they know that even with the toolbox that they’ve developed, there’s going to be other use cases that come up. Beckhoff wants it to be extensible, and they’ve built a tool with MATLAB Simulink from Mathworks. This resulted in some incredibly powerful tools, such as data analytics tools, and machine learning.

“In there, you can design your extended algorithm, whatever it might be, for your use case, compile it, basically hit a button and it compiles it, puts it in our platform, and then runs it in real time in our environment. We want to build it abstract,” he said. “We wanted to make it not too application specific and make it extensible. So, for a use case you can come up with, we think we’ve built a product that can really solve it. Or at least help, give you the tools.”