Continue to Site
You are here: Home / Featured / FAQ: What are mechanical, fluid-power, and elastomeric material dampers?

Vibration in industrial machinery often originates from imbalances inherent to motors, gearboxes, and other turning component that excites natural frequencies. Dampers in this context are components that counteract and often isolate the vibration source from the rest of the design or machine — to prevent its propagation of mechanical oscillation. Watch the recent video on this topic for a full explanation: 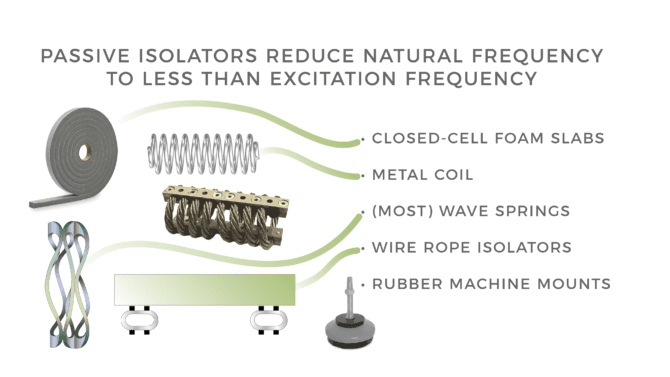 These reduce system natural frequency to less than that of excitation frequency… though to be clear, traditional springs and rubber have near-zero damping capabilities.

Precision passive isolators include negative-stiffness isolators, which decrease system natural frequency upon loading via a kinematic linkage of beam columns and springs … typically stacked in series for tilt, horizontal, and vertical motion. 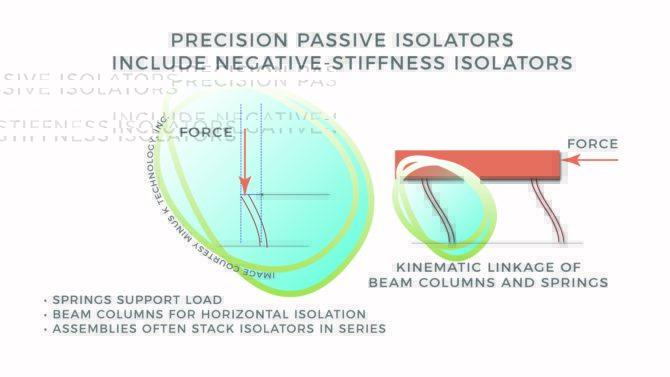 In fact, many isolators do impart a small amount of damping. Some (including wire-rope isolators) also attenuate shock impact at sudden move ends, hard stops, and collisions without recoil — on conveyor e-brakes or axis stroke ends, for example. 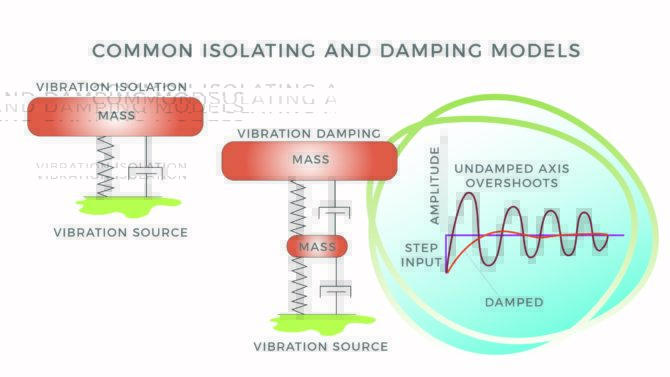 Though not our focus here, active dampers include an array of electronically controlled force cancellers that employ a power source, sensors, and actuation to counteract vibration with disruptive interference … out of phase with the source vibration. These include: 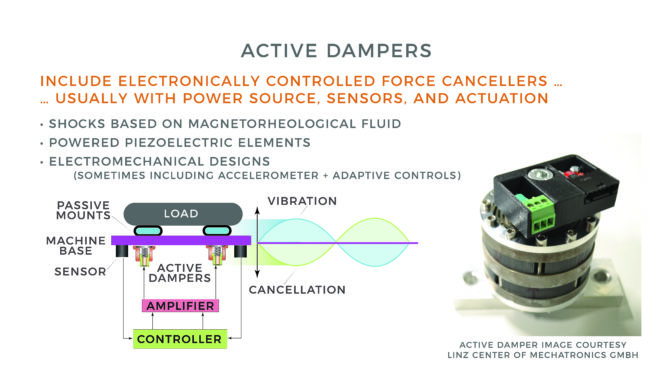 On passive vibration damping — those in mechanical formats include tuned mass dampers that affix to machinery or structures to damp narrow frequency bands of vibration. Other options for passive mechanical damping are friction and piezoelectric action prompted by simple resistive shunt.

Passive vibration mitigation in fluid-power formats include hydraulic mounts, air springs, and bladders to isolate and damp industrial machines and other moving equipment. Passive air tables are another iteration, though increasingly displaced by other technologies. Gas springs (of the piston-type plunger design) act as kinematic holds.

Many pneumatic dampers have a similar structure — with a cylindrical chamber containing a piston and compressed air behind it — though work on moving axes. Oil dashpots employ a contained volume of fluid to resist motion with viscous friction to damp (though not isolate) vibration.

Last let’s consider passive vibration mitigation in elastomeric material formats — which offer simplicity in format and application. Foam slabs isolate well though lacks durability. Rubber and neoprene excel at isolation but not damping. In contrast, another option is viscoelastic Sorbothane material from Sorbothane Inc. that excels at vibration and shock control — absorbing up to 94.7% of the latter.

The material is classified as viscoelastic, as it exhibits both viscous and elastic characteristics when subject to deformation. A high delta tangent — also called the loss factor or damping coefficient — means Sorbothane out-of-phase time relationship between shock impact or vibration and force transmission. Sorbothane absorbs more than half the energies at 1 to 30,000 Hertz for powerful vibration damping … shedding the energy as heat (through hysteresis) and directing remaining energy perpendicularly — 90° out of phase from the vibration or shock source.