We here at Motion Control Tips have been following developments in robotics and motion control, which are closely aligned fields, for quite a while. Mostly this has included coverage of industrial applications and the motors, controls, and software that enable it all. 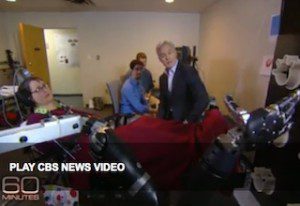 This report on 60 Minutes spotlights some of the groundbreaking work being done at the intersection of human-machine interface at the University of Pittsburgh.

And while the program at the University of Pittsburgh is working in one area, engineers at the University of Minnesota have been able to develop a system to control a flying robot with a non-invasive technique that picks up a person’s thoughts and converts them into signals for a robot.

The thing about these advancements is that we’re still in the early days. While the technology is advancing at a rapid pace and breakthroughs are happening frequently, the time has come to ask what exactly it would mean for humans to become ever more integrated with machines and computers. Will there soon come a time, as futurists like Ray Kurzweil have been saying for a long while, where our fundamental image of who we are will be altered and where we may even speak of a change in what has been called “human nature” when our machines became an integral part of our biological selves?