Continue to Site
You are here: Home / Featured / New warehouse automation and logistics reliant on conveyors: Catino of Interroll explains the trend One trend in the area of logistics is tighter integration of warehousing and assembly — a trend that’s especially evident in the automotive industry but on the rise elsewhere too. That’s according to Maurizio Catino, industry sales manager at Interroll, a material-handling technology supplier.

“Traditional facilities have a warehouse (from which parts originate) and an area for production. External logistics — what trucks bring into and out of a facility — are associated with the warehouse,” said Catino. But new production approaches are spurring different strategies.”

Best-case setups in the past used automatic guided vehicles (AGVs) traveling the plant floor and feeding assembly lines at regular intervals. Personnel working each station were normally tasked with a set of fairly specific operations — picking pieces and fixing these pieces to the main assembly at the right position and so on. But such material-handling approaches are falling by the wayside. Why?

“It’s because production plants are increasingly automated — relying on fewer people for a more reliable process. This in turn is being driven by product customization — as end users today expect increasingly customized product,” added Catino.

Just consider shopping on Amazon: No longer does one need to visit a store and face a limited selection of options. Today’s consumers want and get an array of choices in colors, options, and cost. That means a significant increase of parts in production … and old ways of handling increases in part numbers are insufficient.

Until recently, it was sufficient to use AGVs for running parts from the warehouse to the production plant. But consider a situation where a facility needs a consistent supply of 200 or 300 different parts — a common requirement in the automotive industry. This supply demand would require so much AGV traffic that it would leave no space on the floor for personnel to walk … and there would be a lot of safety issues along with general logistic problems.

That’s why Interroll and other material-handling system suppliers are now working to support 21st Century logistics. We think that sooner or later, all warehouse and production facilities will be connected in better ways. How so?

Well, just consider product cost. Normally baked into this price are the sum of the costs for all the parts in the product as well as the time for the labor it took to assemble the product. In fact, the latter is usually a large portion of the final product cost.

Getting around this problem are new production concepts already in operation — and in fact, Tesla’s Gigafactory is a great example of this. The first objective is to minimize time wasted by personnel in production. Of course, the best way to do this is to totally automate all processes using robots. But robots aren’t suitable for all assembly tasks … so at the end of the day, the real objective is to eliminate the manual execution of rote tasks while still keeping personnel to complete value-added activities.

Reconsider a traditional production approach. Assume we have an employee assembling a portion of a car engine on an assembly line. Normally he fits an array of parts to the main assembly while an AGV intermittently supplies racks of parts bins with fresh supply. Other pallets and boxes sit around his work cell — and so our employee must constantly step away from his assembly position to these boxes. Sometimes, the boxes are in slightly different positions — which means he might not automatically knows where to get a given engine piece. Then our employee must look and walk around for parts — and that’s a waste of time … not value-added activity.

In fact, any time this employee spends walking around and retrieving parts isn’t time that customers want to cover in their product’s final purchase price.

So new logistics concepts are based on the idea that our employee shouldn’t have to walk around for pieces … but rather that parts should come to him. The main (and best-known) concept of this approach is the so-called World Class Manufacturing (WCM) concept invented by Toyota. This concept defines a space called the Golden Area — the area around the operator in which time is perfectly used.

In an optimized assembly setup, all pieces that this employee must assemble into the engine must enter this Golden Area. That lets him efficiently pick and attach pieces one at a time to the engine before him. Complicating this task is that such operations involve lots of parts, product codes, and delivery dates.

In fact, in a few installations, Interroll MCP conveyors interface with automated warehouse cells that load boxes of parts onto the conveyors. Then these boxes are conveyed to production and arrive in front of the operator. Our employee receives the right piece at the right time, in the right position, so his work is extremely efficient — I’d say 100% efficient. He can stay put and doesn’t need to hunt for parts, so concentration is on the actual assembly task. Such conveyor installations also help to save floor space because there aren’t pallets stored on the assembly floor. Plus employee time is strictly focused on the valuable portion of his former suite of mixed-value tasks.

Of course. Several major players in the automotive manufactory have implemented quite complicated installations based on this new concept with great success.

Eitel • Design World: Do these installations use any overhead storage?

No, storage isn’t overhand — these are automated warehouses including Interroll subsystems and equipment from other automation suppliers. The concept is based on box storage in a dedicated building where parts also happen to be sorted … because the volumes of these parts are enormous and growing all the time … so facilities actually need significant space to sort parts.

Eitel • Design World: Are there iterations that incorporate parts bins or pallets? Does our hypothetical assembly employee get groupings of parts fed to his work cell?

Let’s say that there’s a flow — so-called one-piece flow. Here, two conveyor lines (the assembly line and the parts-feeding line) run in parallel. Car engines on the (totally independent) assembly line run in front of our employee, while the logistics line is behind him. Everything works with software. Each engine-carrying conveyor pallet sports an RFID to let the conveyor system continually track every engine in realtime. Because everything is automatic, just as a given engine comes into our employee’s work cell, he gets the box of parts needing assembly onto that engine.

We see warehouse automation and production logistics becoming increasingly reliant on conveyor systems — in no small part because of the exponential rise of ecommerce and how parts distribution is increasingly complex.

Consider another application — that of automotive tire warehousing and distribution. In the past, third-party suppliers sold tires to dealerships and garages that assembled the tires to wheels as needed. But middleman involvement added cost.

Today we see an uptick in online car-tire sales through ecommerce platforms. Users go online and buy preassembled and balanced tires without visiting a garage. The only catch is that the warehouses for such modes of distribution require advanced logistics. So Interroll sells roller conveyors into this growing industry to optimize facility automation much like in our engine-assembly example.

Eitel • Design World: It’s striking how pick-to-order approaches in ecommerce are coming to displace batch approaches — and how much the former resembles the new modes of assembly we’re discussing. Are they very different?

They share many similarities. There’s a parts-picking philosophy guiding them both … so even the software that drives these applications is similar. Essentially, a product-picking employee must pick pieces to populate a box for an order and then ship that order onward … which very much resembles the optimized tasks of our assembly employee. For more information, visit interroll.us/en-us/industry-solutions/tire-automotive. 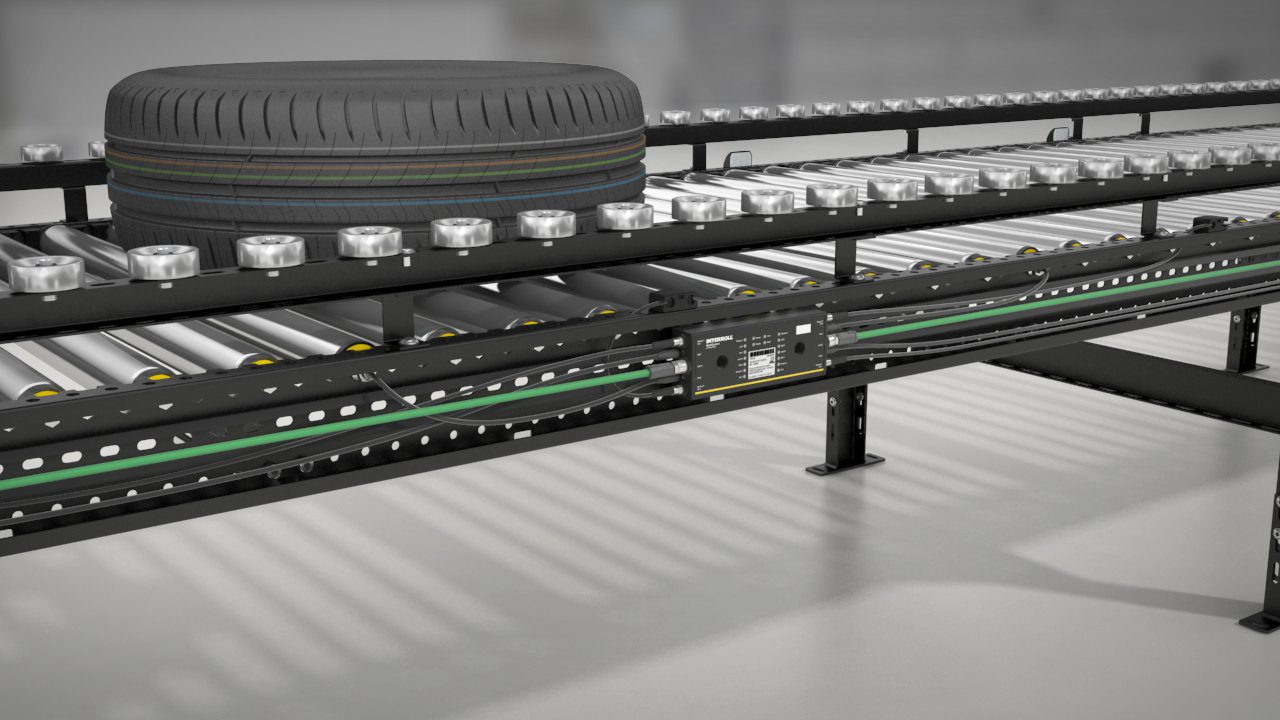