Continue to Site
You are here: Home / Controls / Intelligent amplifier works as a servo-drive/controller 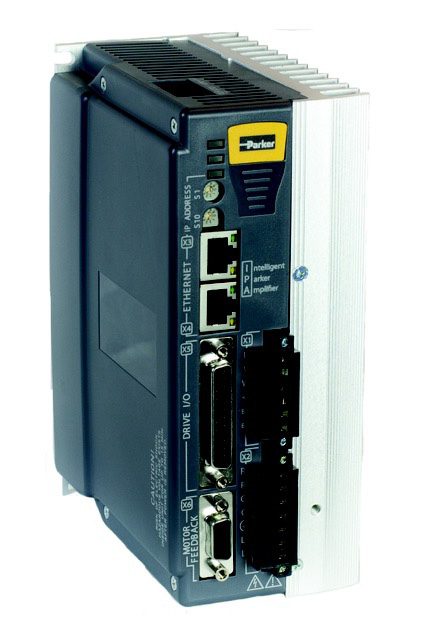 A dual-port Ethernet interface lets users connect several machine controls; Ethernet implementation is suitable for HMI, PC, and PLC-based applications. The IPA supports EtherNet/IP as an adapter device, so can act as a servo drive in an Allen Bradley CompactLogix or ControlLogix-based system; ODVA confirms its EtherNet/IP conformance.

A library of add-on instructions (AOIs) for the Logix familiar software environment of Logix lets programmers easily incorporate servo control. Users can configure and program the servo-drive/controller via standard TCP/IP communications within the ACR-View software environment (in the AcroBASIC programming language).

A 650-Mhz TI DSP gives the IPA processing power to serve up to five independent Ethernet connections and manage a multi-tasking ACR operating system at speeds that rival the highest-performance controllers in the industry.

• Multitasking of up to 16 different tasks and incremental, absolute, and continuous moves

Users can also combine the IPA with an Interact Xpress HMI platform, to get affordable machine control.  Xpress supports connections to multiple IPAs and other PLCs. For more information, visit parkermotion.com/IPA.

Parker’s Electromechanical Automation Division, a supplier of vehicle motor and electronics technology, is pleased to announce the first phase of its traction motor launch: the GVM210 …

The case for either the permanent magnet or the induction motor design is unclear, so how do hybrid vehicle OEMs decide which is best?