Seven hundred and fifty people from the power transmission/motion control (PT/MC) industry, including nearly 590 delegates, came together October 19-22 in San Diego, Calif., where tools and information to “Lead in Disruptive Times” were delivered through cutting edge presentations, the latest in business and market information and multiple networking opportunities.

The PTDA 2016 Industry Summit, held at the Marriott Marquis San Diego Marina, is now history, but many predict the conference will have lasting reverberations as industry leaders take home what they learned and implement new ideas in their industrial distribution and manufacturing businesses from over 12 countries.

“Participation in the PTDA Industry Summit is the most effective way to build relationships and make connections in the power transmission/motion control industry. Coupling the networking opportunities with the inspiring IML Talks and Deeper Dives as well as the economic outlook from Alan Beaulieu makes this meeting a business requirement,” said LeRoy Burcroff, VP sales, Bearing Service Inc., Livonia, Mich., who is currently serving as president for the Association.

Sean Hickey, president, Lafert North America, Mississauga, Ontario, Canada, who serves as chair of the PTDA Manufacturer Council echoed that sentiment, “The quality of the networking events is second to none. Every year, it surpasses our expectations!” he said.

Key highlights included the MD-IDEX, which included more than 612 pre-scheduled meetings during the four-hour formal networking program and countless unscheduled and impromptu meet-ups. Set on the last day, this event is designed to give manufacturers and distributors a time to sit down and chat about what’s new or develop new business relationships.

I had a chance to chat with several of the manufacturers hosting meetings, including members new to the MD-IDEX format. They included Auburn Bearing & Manufacturing, Delta Products Corp., NBK America, Isutami USA, and MDM Analytics, among others.

As Harvey Eure, Product Manager VFD/PQ, Industrial Automation Business Group for Delta Products said, the PTDA Industry Summit and the MD-IDEX is a great opportunity to increase distributors’ awareness of the company. “This has been a great experience. Our objective was to meet as many people as possible,” Eure said. “As a new member, it’s been very successful for us. It’s going to help increase our market presence with distributors and our growing brand in North America.”

A cool concept was the format of the PTDA’s IML Talks with Deeper Dives, which allowed participants the opportunity to hear three presentations and then sit in on a more casual talk with the speakers to gain more insight and share insights as well. They included:

Well-deserved recognition
Additionally, the Warren Pike Award was presented by PTDA to Keith Nowak, president, MPT Drives, Inc., Madison Heights, Mich. Named for PTDA’s co-founder and first president, the award was established in 1984 to honor individuals who have demonstrated outstanding, continuous, long-term support of PTDA and the PT/MC industry, and is only presented when an individual’s achievements merit this prestigious recognition.

Nowak has been an active and committed PTDA and PTDA Foundation volunteer for more than 15 years, currently serving as a Trustee for the PTDA Foundation. He was a member of the PTDA Board of Directors from 2007-2013, serving in officer positions including a term as president in 2010.

Special note was given to the PTDA Foundation’s efforts, including its work to engage young people in industrial automation careers, with pledges by PTDA member companies of $61,000 to support the work of Industrial Careers Pathway (ICP). The Foundation also recognized Linda Miller, VP IT & HR, B & D Industrial, Macon, Ga. with the Wendy B. McDonald Award. Read more about the Foundation news here. 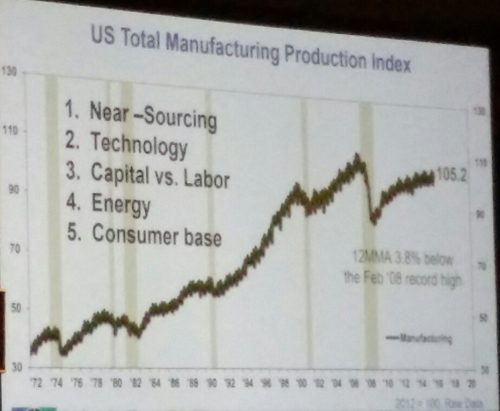 The official meetings wrapped up with an upbeat presentation by Alan Beaulieu of ITR Economics, who provided industry-specific management objectives and accompanying recommendations to guide PTDA members through the next few years. In his talks, he noted that PTDA member companies should be upbeat through 2017 as the GDP continues to expand.

Beaulieu continued to note that manufacturing is still strong in the United States, showing with some graphics how business is not fleeing the U.S. but rather more near-sourcing, capital spending and foreign investment is helping manufacturing grow.

And he predicted that the U.S. will still remain a global economic power well into the future. As he said, there are 80 million members of the Baby Boomer generation but 86 million Millennials. No other country has a population of young people even near that size, Beaulieu said, which means we will continue to have strength in numbers.

He concluded by saying “Life is good. And you’re going to enjoy 2017.”

The celebration all culminated in the “Get Wild” at the San Diego Zoo, where attendees got up close and personal with some of the more docile species over dinner, music and networking after exploring the zoo on their own for a couple of hours.

Looking to 2017
Next year, the PTDA will join with NIBA—The Belting Association for its annual summit. The NIBA/PTDA Joint Industry Summit will be held September 27-30, 2017, at The Diplomat Beach Resort, Hollywood, Fla.