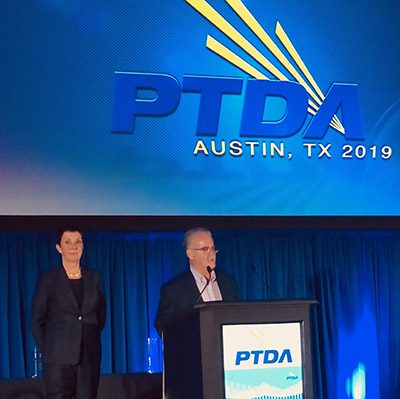 Sandy joined Nidec Motor Corporation/U.S. Motors in 2003 and rose from a role in business development to her most recent position as national account director. Sandy’s work ethic was to “do whatever it takes” to solve an issue for her customers. Similar to Mrs. McDonald’s experience, Sandy succeeded in this industry through building personal relationships while giving back to the industry.

Sandy served on a variety of PTDA committees and task forces. She is especially proud of having been instrumental in establishing PTDA’s Women in the Industry community.  Starting with a small group of women getting together at PTDA meetings, it has grown in size and holds quarterly conference calls with open discussion about succeeding as a woman in the power transmission/motion control industry.

In her acceptance speech, she urged everyone in the room to think about what they could personally do to inspire or mentor a female in the PT/MC industry.

The award was presented to Sandy during the PTDA Industry Summit by Brian Short, Global Strategic Account Manager at Regal Power Transmissions Solutions and President, PTDA Foundation Board of Trustees.  For further information, visit ptda.org/WendyBMcDonaldAward.