Continue to Site
You are here: Home / Networking + IoT / Trends in networks: Connecting to the Internet of Things 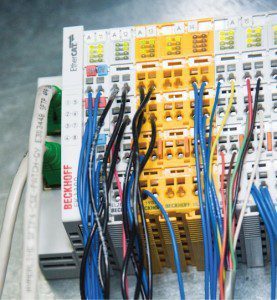 Back in 1982, General Motors demanded that all automation control suppliers develop a communication standard that would let the automaker gather data easily from all its machines. This attempt was known as the Manufacturing Automation Protocol (MAP) and it was a huge failure. The controls vendors did not cooperate, resulting in a seven-layer monster that actually slowed the transmission of data. GM was not pleased. So the vendors shrank it down to three layers, which was not much of an improvement. At about the same time, another communication protocol of seven layers, the Open Systems Interconnect (OSI) model was under development. It was more organized than MAP, and became the foundation for the controls vendors’ proprietary “field and device level buses” as they used OSI’s first two layers. Today, Ethernet is the most well known version of these first two layers.

Soon after, nearly every drive manufacturer found it had to be compatible with all the major field buses, which numbered at least ten. Now, 33 years later, we have the Internet of Things (IoT) driving the desire for data and all the perceived benefits and efficiencies it may deliver.

Those field- and device-level communication protocols that survived are preparing for the IoT. And drives and motor developers are working to connect all things to the Internet as well.

Yet, motion control systems will need communication protocols for other reasons too:

• Many applications require tight coordination between axes to maximize both quality and throughput. The manufacture of flat-panel displays and batteries, for example, is becoming increasingly sophisticated as the products get more complex. But the demand for lower prices requires increased efficiency at every step, including testing. In many industries where the main process was automated, loading and unloading were still manual. Now these ancillary processes are automated and highly integrated, noted Curt Wilson,VP of engineering, Delta Tau.

• Several networks are working on more efficient messaging. For example, the use of standard prioritization services for different message types, such as motion, I/O, safety and so on. Motion traffic can be prioritized over standard I/O traffic.

• The trend of using more servos to control more axes is increasing the demand for more coordinated axes. This development is driving the need for more capabilities from industrial networks that help synchronize all of these motion control devices, added Zuponcic.

• In addition to increased flexibility, the market is also demanding networks converge into a single approach. Versions of Ethernet networks are already being used for many motion, control and information applications. The emergence of Ethernet as a standard has been driven by the market’s need to obtain data from all sections of the production and enterprise domains and to be able to configure and control down to the end device in the system. Ethernet/IP, for example, enables data to be transmitted from motion, control and sensors, but it may not be enough for some applications, especially as the IoT increases data demand.

• Today’s data collection involves alarming, diagnostics and general metrics of a device. Soon, it will involve smart decision making if the IoT develops as proponents hope.

• One of the most interesting recent advances involving networks has been in the area of hydraulic-based motion control. The industry has found that it is simpler and more precise to synchronize multiple hydraulic actuators using a communication protocol like Sercos than by conventional means, noted Friedrich Scheurer of Bosch Rexroth. Applications such as injection molding or metal forming presses use Sercos as the nervous system for centralized multiple input/multiple output (MIMO) control systems. Even large structures used in water engineering, ships and large buildings are run with centralized hydraulic controls through the Rexroth IndraMotion MLC for Hydraulics function toolkit.

• Many motion specific networks already include the features needed to work with IoT applications. All that is required is to activate them.

“The Industrial Internet (or IoT) makes it possible to collect and integrate much more information than we ever have before,” said Claes Rytoft, ABB Chief Technology Officer.

As companies shift to Gigabyte networks, the choice of what data are sent from a device to a controller becomes important. Measurement devices, such as encoders, or other motion control devices, such as power transistors, can have small imperfections in their signals, noted Wilson. While there are devices to correct those signals, you still may not want a network to send every bit of data.