Here we outline five things to know about electrical slip rings and their brushes, voltage drops, and noise mitigation. Also be sure to check out the FAQs: What are slip rings and why do some motors use them? and What’s the difference between electromechanical and fiber-optic slip rings?

• Composite brushes are made of carbon graphite sometimes with metals included to boost current capacity. Such brushes resemble those in brushed electric motors. Composite brushes excel where higher current and rpm are involved.

• Other brush options include monofilament wire that partially wraps around the slip-ring drum at a channel — and is made of precious metal such as silver, gold, or palladium. These are common in low-current slip rings needing clean signal transmission and minimal contact resistance.

• Polyfilament is also made of precious metal and partially wraps the slip-ring drum but includes multiple contacts per channel. Polyfilament brushes exhibit minimal contact resistance and noise, which makes them suitable for transmitting sensitive analog signals or data at high rates for real-time control. 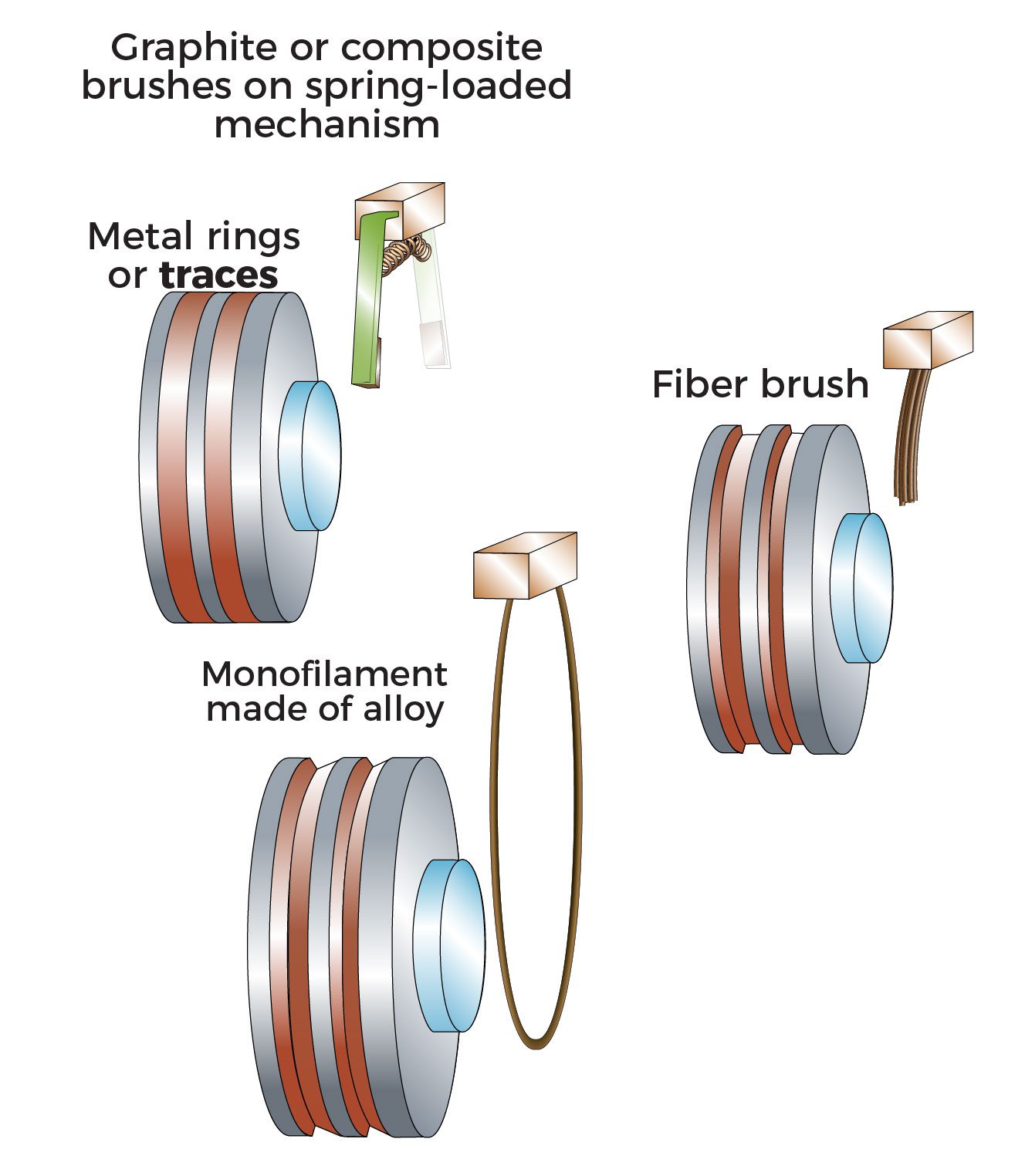 2. Even the most basic brush-and-ring slip rings transmit power — but the selection of brush type is critical.

Parameters that dictate the most suitable choice include current, rpm, and temperature.

Note: Transmission of power also requires consideration of the voltage drop across the slip ring and actual current flow. Any drops affect available voltage at load … and power dissipation within the slip ring. The latter turns to heat and significantly impacts operating temperature.

The way brushes for data create electrical-resistance variation during rotation degrades transmission quality. This variation depends on the brush contact mode and force, rpm, and temperature. One solution for advanced applications is to use multiple contacts for each channel — as in the form of polyfilament brushes — to reduce this resistance variation.

No matter the brush form, rates and capacities are key slip-ring signal-transmission parameters. Many offerings with Ethernet connectivity transmit signals and data at speeds to 10 gigabit per second (Gbit or simply Gb) or higher. Common offerings today go to 1 Gb — a fairly standard benchmark — though even slip rings with this speed of transmission are still fairly specialized solutions.

Of course, suppliers underscore that most OEMs don’t even need 1 Gbit; slower 100 megabits per second (Mb) is sufficient. But as the number of sensors increases, and slip-ring-serviced designs become more complex, Gb-level speeds — in the form of Gigabit Ethernet (GbE or GigE) in many cases — will become more of the standard. 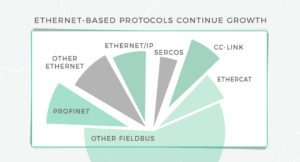 Note: Beyond signal transmission is the movement of data over a slip ring — a common manufacturer differentiation. This data movement is the sending of high-frequency information for higher-level controls and operational functions … often over Ethernet or one of the derived protocols such as PROFINET or EtherCAT.

Many such protocols enable control of various machine subsystems, support IIoT functionality, and allow use of all the data originating from the proliferating sensors on machines. Ultimately their spread will necessitate more (and faster) data transmission via slip rings.

Mitigation of EMI is sometimes expressed as electromagnetic compatibility or EMC. Transmitting data necessitates slip rings with higher bandwidth and better EMI mitigation than those transmitting power. EMI often travels via conduction and radiation. The former takes the form of detrimental high frequencies riding the line electrical supply or signal. In contrast, radiated EMI propagates electromagnetic noise through space to nearby equipment. Shielding slip-ring connections against such EMI is paramount. 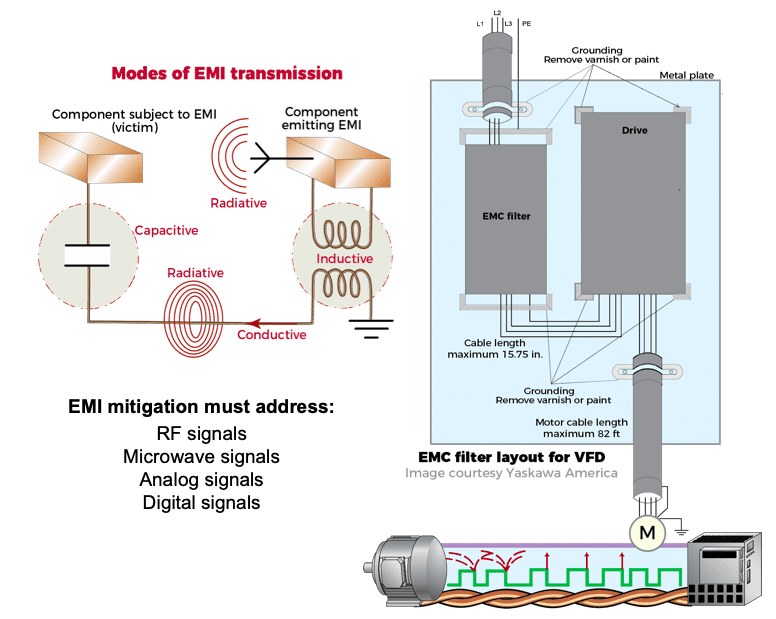 Note: Radio-frequency or RF shielding is another feature common in slip-ring connections. Recall that even if EMI and RFI are used interchangeably, they’re different. More specifically, EMI is electrical noise of any frequency, while RFI is that from 20 kHz to about 300 GHz.

Assume a design engineer or OEM has a large electric motor that’s spinning some machine axis. That motor will have a drive such as a VFD generating a lot of electrical noise. 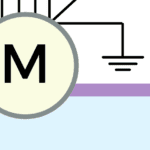 Nearby slip rings that aren’t properly grounded will be affected by this noise; interference originating from that motor drive will couple to the slip-ring traces and introduce interference on communications or signal lines.

For designs where EMC is a design objective, a fully metal enclosure with a dedicated ground — along with only shielded cables — mitigate most EMI.

Note: Such preventative measures become more critical as the data speeds increase. That’s because at some point as the frequencies rise, data signals on the wires from the slip ring become emitters themselves.