Continue to Site
You are here: Home / FAQs + basics / FAQ: What is the Department of Energy’s new Small Motor Rule?

Large motors have been subject to energy efficiency regulations for quite some time. The U.S. began regulating energy efficiency of integral horsepower motors back in 1992 with the passage of the Energy Policy Act (EPAct). Subsequent updates to this original legislation include the EPAct in 2005 and the Energy Independence and Security Act (EISA) of 2007, which expanded the types of motors covered as well as upping minimum efficiency levels.

A new regulation took effect in March 2015. It was designed to raise the efficiency level of small electric motors, two-digit NEMA frame single- and three-phase general-purpose motors in the range of ¼ to 3 hp, that are housed in open drip-proof enclosures.

On June 1, 2016, a new energy efficiency rule goes into effect. This extended Small Motor Rule (SMR) covers 60-Hz, three-phase electric motors from 1 to 500 hp (0.75 to 370 kW) with voltage ranges below 600 V. Designations for which motors are covered by the SMR are in horsepower but also NEMA frame size. 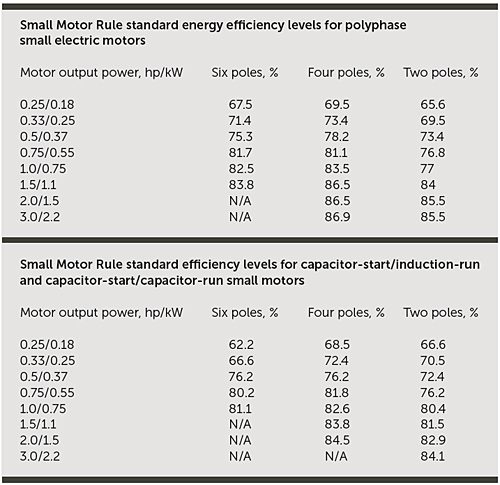 How important are such energy efficiency standards? According to the U.S. Energy Information Administration, nearly half of the electricity consumed in the manufacturing sector is used by electric motors. These motors power devices such as fans, pumps, conveyors and compressors.

Other studies make predictions for how much energy will be saved by implementing these efficiency standards. For instance, according to a Department of Energy analysis, estimated savings for the lifetime of electric motors purchased over the 30-year period that begins in the year of compliance with the new standards to be 7.0 quadrillion British thermal units (Btu). The annualized energy savings, 0.23 quadrillion Btu, is equivalent to 1% of total U.S. industrial electricity consumption in 2013.

Put another way, estimates are that the standards will save 2.6 quads of energy with an estimated energy bill savings of $35 billion for products from 2015 to 2044. It will also cut 133.6 million metric tons of CO2 emissions.

To find out more, check out the U.S. Department of Energy page for electric motor standards.

And for a more detailed look at some of the motors impacted by the new standards, check out this article from Design World and EE World Online editor Lee Teschler.