Continue to Site
You are here: Home / FAQs + basics / What are current and future MEPS for electric motors?

Minimum efficiency performance standards, or MEPS, specify the required efficiency levels for electric motors used in residential, commercial, and industrial applications. The goals of implementing MEPS are to increase energy efficiency, promote energy savings, and reduce operating costs for electric motors. And although work is being done to harmonize electric motor efficiency classifications, MEPS vary among countries and regions, based on local markets, technical needs, and product availability. Below, we outline the MEPS for two major global regions: the EU and the U.S.

Work by the International Electrotechnical Commission (IEC) over the last 10 to 15 years has helped to unify the testing methods and efficiency ratings used by manufacturers around the world. In fact, many countries and regions either use the IEC efficiency classes and test methods, or have developed their own classification system and testing methods that closely match the IEC versions.

MEPS for the EU market

In January 2017, the motor range was extended, and IE3 efficiency is now required for motors from 0.75 to 375 kW. Note that the IE4 (super-premium) rating was also introduced in January 2017, although to date, there are no motor configurations that are required to meet IE4 efficiency ratings.

There are several exceptions to the EU MEPS requirement, with one of the most significant being motors controlled by variable speed drives (frequency converters). Motors for this use are allowed to meet the lower IE2 efficiency rating, since the VSD provides efficiency improvements by matching the motor operation to the load requirements.

Other exceptions include submersible motors, those that are integrated into a system that prevents the individual motor efficiency from being tested, and those designed to operate at extremely high or low temperatures, in explosive environments (ATEX), or at altitudes above 1000 m above sea level.

According to the European Commission (EC), a new regulation will be introduced in 2021 that covers a wider range of motors, including:

The new regulation will also address the efficiency of variable speed drives and will require information regarding efficiency at different load points (speed and torque) for both VSDs and motors. The purpose of this requirement is to facilitate efficiency analysis for an entire motor-driven system.

MEPS for the U.S market

The US was the first to introduce minimum efficiency performance standards (MEPS), back in 1997. General-purpose motors from 1 to 200 hp were originally required to meet NEMA Energy Efficient standards. But in 2010, the EISA (Energy Independence and Security Act of 2007) increased the requirement for general-purpose motors to NEMA Premium Efficiency. Other 1 to 200 hp motors, along with motors from 201 to 500 hp, were still required to meet Energy Efficient standards.

In June 2016, efficiency standards in the U.S. were increased once again with the Integral Horsepower Motor Rule. Under this final rule, almost all single-speed induction motors are required to meet NEMA Premium Efficiency levels. (Some notable exceptions to the IHP rule include motors with two-digit frame sizes, AC synchronous motors, AC motors with permanent magnet rotors, servo motors, and DC motors.) 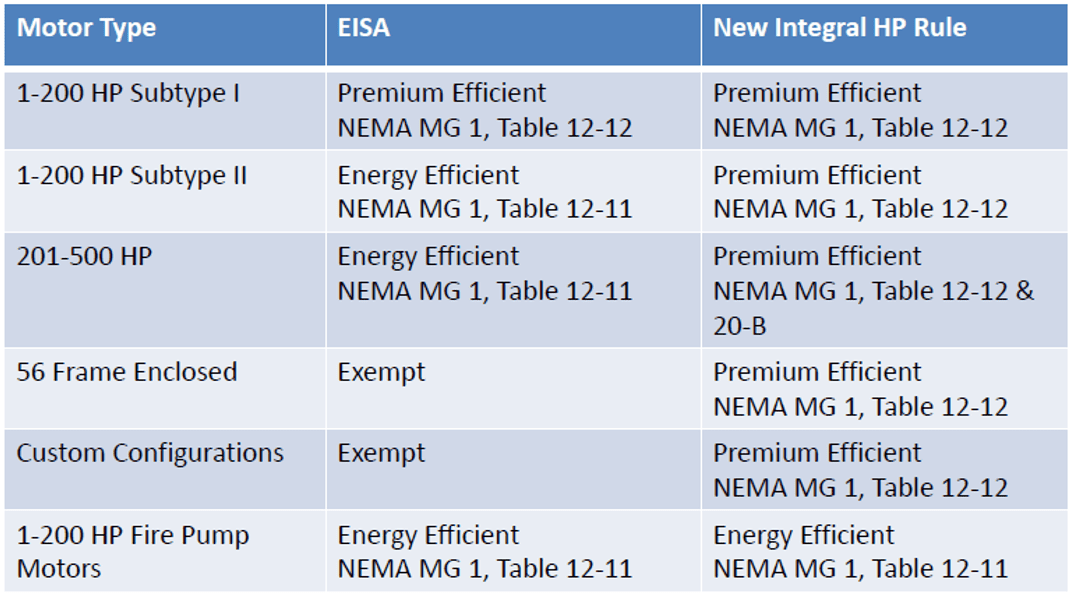 However, smaller motors aren’t off the hook in terms of efficiency. The Department of Energy’s Small Motor Rule (SMR) took effect in March, 2015. The SMR applies to open, drip-proof, general-purpose motors from ¼ to 3 hp, both single phase and three phase, with 2, 4, or 6 poles.

In the U.S., the Energy Policy and Conservation Act requires that the DOE review energy conservation standards every six years, and in light of that, the DOE has issued a “Request for Information” from the public to determine “whether significant energy savings could be achieved by amending the standards for small electric motors, and whether such standards would be technologically feasible and economically justified.”

The regulations and rules specifying MEPS for electric motors can be difficult to follow. To help you navigate efficiency requirements, the links in this article reference the most current (and upcoming) standards regarding electric motor efficiency published by regulating bodies in the EU and U.S.